Hike Messenger users can now exchange texts and files without an internet connection through a new feature called Hike Direct. However, the service only works if the two people are within a 100-meter radius of each other.

The India-based company promises speeds of up to 40Mbps, and further claims Hike Direct can send a 100MB file within 10 seconds. It works via Wi-Fi Direct, which is present in most smartphones nowadays. The technology generates a wireless network between devices, thus going around the need to use mobile or Wi-Fi data.

Hike Direct is now available for Android users. They can utilize it to swap pictures, stickers, audio, videos and large files. To access it, all a person has to do is tap on the triple dot logo in the top-right corner of a chat screen and select the service from the list of options. The individual they’re attempting to connect with has to perform this step at the same time. 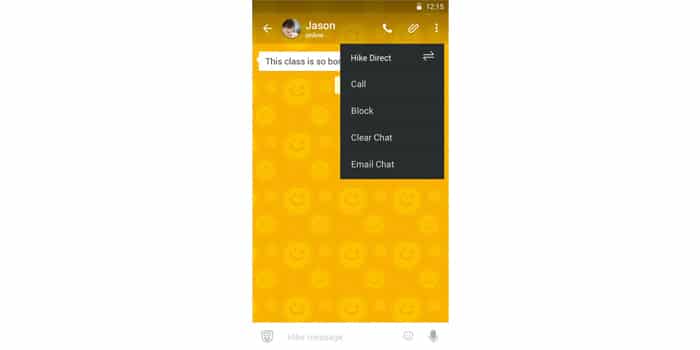 Hike asserts that it currently has a consumer base of 70 million, with nearly 20 billion messages getting exchanged on a monthly basis. The company recently rolled out a number of updates to its platform, including the ability to have conference calls between 100 people, groups with 500 members in them, and 5000 new stickers in 30 different Indian languages.

Hike also announced it was introducing Hindi to its News service, which now has roughly 1 million subscribers using it daily. It sends out more than 100 million bite-sized stories a week. The brand plans to integrate more regional languages into the platform in the next couple of months.

You can download the latest version of Hike Messenger from the Google Play Store. iOS and Windows users will have to wait till next year to try out Hike Direct.