TechShout
Home Software Google Maps for iOS now tells you about traffic warnings as you...

There’s a new Google Maps update that’s live on iOS for the iPhone version of the navigation service. This fresh edition of the software brings with it traffic alerts which are spoken out by the app to warn you about what lies ahead.

The feature had already made its way into the Android version of Google Maps back in May this year. It of course only works when you’re in navigation mode. If in any case there are obstructions along the route that you have chosen, alerts about any congestion, crashes or road blocks will be provided as you move along.

Besides, the moment your navigation on Google Maps starts, the iOS app will provide you with a verbal summary of the conditions that lie ahead for you. This could help you change your route if it does not suit your liking. 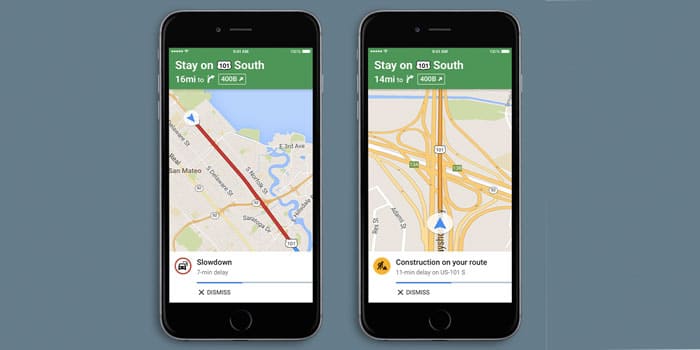 Apart from that big feature, the developers of this app have also laced the update with another small addition. Users of Google Maps on iOS will now easily be able to add new and missing businesses by accessing the option from the sidebar.

It was only recently that Google blessed its navigation utility with a Your Timeline section. It has been aimed at giving you a detailed summary of the entire day in terms of where you were at a given time. It moreover doesn’t stop at just that as it even adds photographs you’ve clicked at a certain location to your timeline automatically.

The Google Maps update which introduces enhanced traffic updates to the iOS app can be grabbed now through the Apple App Store.