Causing outrage amongst WhatsApp users who’re calling it a breach of privacy, the company has launched an update which brings blue tick marks to tell a sender of a message whether the receiver has read it or not. iPhone and Android device owners have already started seeing the new feature which is targeted at all versions of the app, in their chats.

The change will be seen for WhatsApp groups too, with the standard single tick turning blue once everyone included has read the message sent by a member. This is not the first time the messenger application has tried to trick users into giving up their privacy. There was that obnoxious ‘Last seen’ roll-out which was greeted with jeers until another update to make it less intrusive was launched. 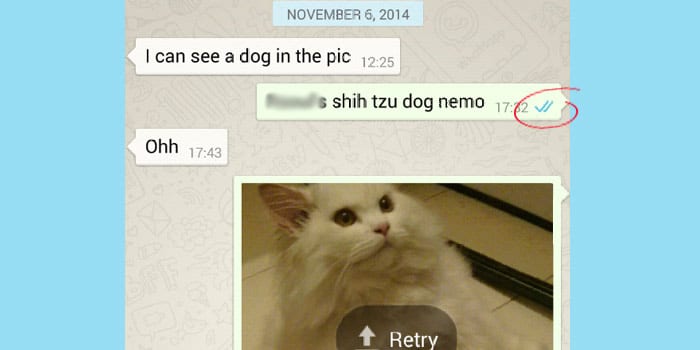 You can argue that Facebook’s IM app and Line each offers a similar feature to the latest blue checks by WhatsApp. But we want better service from the latter even if Zuckerberg and Co. have taken over. Before the telltale blue marks started creeping into your chats via the OTA upgrade, the application would only notify a user whether their message had been sent and then received, with one tick for each.

Also see: Your WhatsApp can easily be hacked, here’s how to prevent that from happening

The blue check marks may not appear next to something you’ve sent if the receiver has an old version of WhatsApp. It could also happen when you or the would-be recipient is facing connection problems. If the person to whom you’ve beamed a message has not opened it, you’re not going to see the two ticks change color either. So no more lying about not having got your friend’s ‘Hello!’ or whatever else to which you don’t feel like replying.

We don’t see the positive side of being forced to acknowledge receipt of a message or face those blue ticks telling on us. If you think the latest WhatsApp update is useful in any way, pray enlighten us.