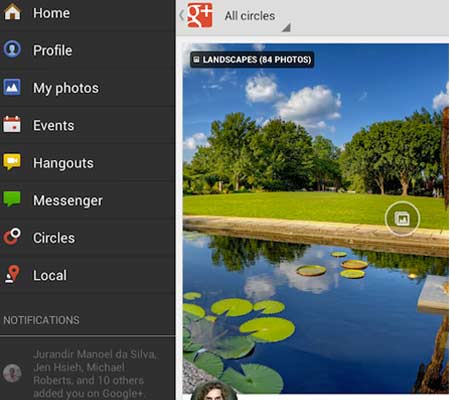 In response to feedback from users, the guys over at Mountain View have decided to offer new tools such as the Google+ for tablets app and Google+ Events. Currently the Google+ application for Android is being rolled out and the iPad version will soon make its way into the Apple App Store, reveals the official Google blog.

The social application for tablets displays content on the basis of popularity, orientation and type. The Hangouts feature has been enhanced for slates and the app includes features like crisper text, improved pictures and an intuitive interface to facilitate commenting or using the +1 button.

“Back in May we introduced new versions of Google+ for Android and iOS phones. In both cases we went native (with gestural navigation, fullscreen media and face-to-face video), and it’s had a powerful impact on community engagement. In fact, more people now use Google+ from a mobile device than a desktop computer, and today’s tablet release will quicken this trend,” stated Vic Gundotra, Senior Vice President in a post on the official Google blog.

With the new Google+ Events, the search engine giant has introduced a way to celebrate virtually. The invites sent from this software can be personalized with the help of cinemagraphic themes, YouTube videos and animations. As it automatically syncs with Google Calendar, managing and keeping tabs on guests’ updates should not be a problem. Additionally, by activating Party Mode on their mobile devices, users can upload pictures to event pages and view them using ‘live slideshow’ in real time.

The Google+ for tablets app can be downloaded for free through the Google Play Store.