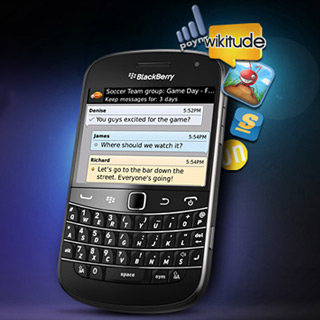 RIM has been sitting on this for quite some time and now it looks like BBM 6 is finally ready to hatch out. BlackBerry Messenger is a sort of IM service which supports connected apps and lets users chat up friends from right within the concerned application.

Say a user wants to invite a friend into a game and chat with them, the service allows this functionality with real-time messaging and without requiring gamers to stop playing or to leave the app. The RIM BBM 6 software is available through the official BlackBerry website and the list of connected apps is slated to get longer over the approaching months. Apart from the social gaming aspect of it, the utility has also been designed to accommodate other things like productivity apps.

“BBM 6 marks the beginning of an even greater social experience for BlackBerry smartphone users,” cited Alistair Mitchell, VP, BBM Platform and Integrated Services, RIM. “It also represents an incredible opportunity for developers to leverage the viral nature of the BBM service and we have already begun working with various developer partners who will be bringing their BBM connected apps to BlackBerry App World this week, offering users highly engaging app experiences.”

RIM BBM 6 lets users share interesting apps with others directly from within the app that’s being used. Pulling up BBM contacts is also possible right from within a supported app. What’s more, the entire process of downloading content from BlackBerry App World has been simplified with the ability to discover new apps by viewing the list of apps posted to a BBM friend’s profile and clicking on it in order to download it.

RIM BBM 6 has already been launched along with a collection of connected apps through BlackBerry App World.