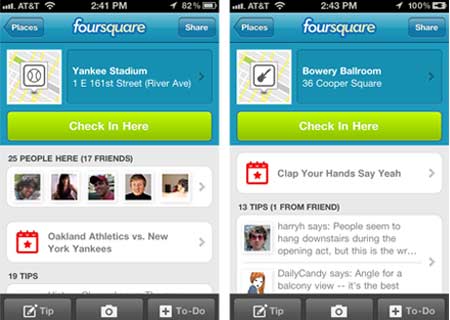 Foursquare will now let users brag about events they are attending along with the venue as sometimes ‘the place is more than just a place,’ states the official blog of the social networking service. In association with ESPN, SongKick and MovieTickets.com, Foursquare has added a number of events to its database negating the need to type them out.

Initially the event check-in feature was tried in Austin and the positive feedback to the service prompted the company to release it on a larger scale. In order to not miss out on important events, the social networking service has joined hands with ESPN, MovieTickets and Songkick to offer check-ins to sports events, movies and concerts.

In addition to details about events, the new associates of Foursquare will also provide other information about games along with links and summaries of movies being played. Moreover, participants of the competition launched by Songkick can go on to win free concert tickets. About a year later, users can go back and remember concerts, games and movies they checked-in with the aid of this new feature.

The application will include thousands of events which are scheduled to take place at about 50,000 venues and display them a few hours prior to the starting time. As the app is now pre-loaded with events, users can not only check into places but also events. Besides saving the shout-typing time, the new feature will apparently lead to a smooth functioning of the user interface.

The event check-in feature has been released for the iPhone and available through the official Foursquare website. It can be availed of without the need for upgrades.