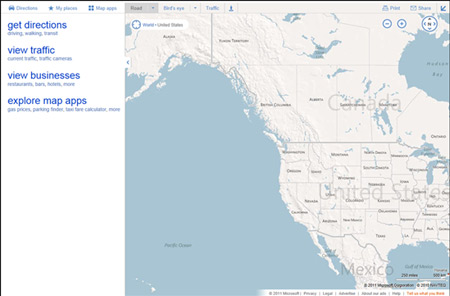 For a better user experience, Microsoft rolls out Bing Maps with a new user interface. The improved and redesigned interface will feature navigation and task controls on the upper part of the screen rather than scattered all over.

Based on what the UI looked before, most of the commonly used controls have been relocated to a more precise location. By doing so, accessing them has become easier and also keeps the map as the main focus.

Most of the on-screen buttons will have text labels attached to them, unlike in the previous version where assumptions of the function had to be made based on the icons. According to the official Bing Maps blog, users on browsers that support W3C Geolocation API can find their current position by clicking the ‘locate me’ button which further displays the users location on the map.

The Bird’s eye 45 degree view and the high resolution Aerial imagery are now directly accessible from the navigation bar. Also users can switch between views with a single click. Based on personal preference, the imagery styles can be selected with or without labels.