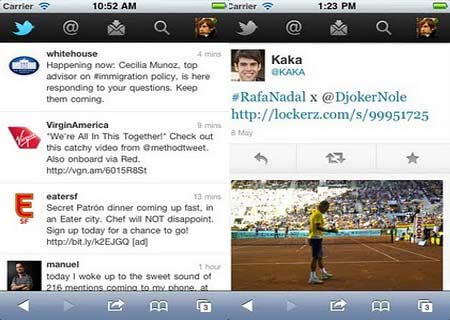 Better is always better, particularly when social activities such as finding and following amigos, sharing photos, or tweeting for fun are involved. And for this, Twitter has been endeavoring to become more desirable in order to render a rich user experience. The company now announces a new version of twitter.com for mobile devices which should revamp users’ entire interaction with the little blue-colored bird.

The freshly enhanced web application enables users to indulge in a high-quality, consistent Twitter experience on high-end touchscreen devices, whether or not an official Twitter app is available. Users can now quickly scroll through their timeline, move between tabs and compose Tweets.

Apart from this, the web app features timeline, @mentions, messages that users can read in conversation view, search, trending topics, lists, and more. The upgraded Twitter app is currently being rolled out to a small percentage of users on iPhone, iPod touch and Android smartphones.

Twitter is anticipated to expand the app’s horizon to additional folks with those devices in the coming weeks. Users can visit the official site in order to play on the feature-rich app, whereas users who don’t have access to the new web app can still use the existing version of twitter.com for mobile browsers.