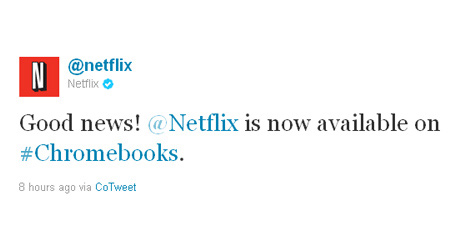 With users having high expectations of its arrival, Netflix today on its Twitter page officially announced the added support for the Chrome OS. So that means users in the U.S. can now stream their favorite movies and shows straight from their Chromebooks such as the Acer AC700, Samsung Series 5 and Google Cr-48 notebooks.

The delay in the arrival of Netflix on the Chrome OS was due to limitations set by Google on support for the Microsoft Silverlight technology. Although a plug-in was developed to allow users to access the video streaming service, the official Netflix application can be utilized to do the same from the Chrome web store.

Additionally, to install the app, all users need is a Netflix account and the latest version of the Chrome operating system. To start streaming on Chromebooks, a simple click on the ‘wrench’ icon located on the browser toolbar followed by the ‘About Chrome OS’ button will allow users to update their system and gain access to the Netflix service. Also, the application can be installed onto the Chrome web browser to instantly watch TV shows and movies streaming from Netflix.

The Netflix video streaming service is available on the Chrome OS and Chromebooks such as Acer AC700, Samsung Series 5 and Google Cr-48 notebooks. Although the OS is Linux-based, users on the Linux operating system will still have to patiently wait for the Netflix support. Google Cr-48 users currently can only stream videos in low resolutions as support for HD playback is not added.