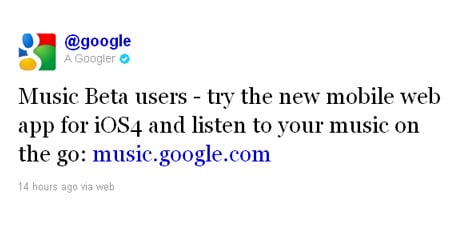 Live since May 2011, the cloud-based service Google Music Beta has finally found its way onto the iOS platform. But, unlike the native Android application, the company has expanded its reach onto the iPhone, iPod touch and the iPad through a HTML 5-based web app.

According to post made on Google’s official Twitter account, devices running on the iOS platform can now get access to Google Music Beta through their web browsers, eliminating the need to download any additional applications. With the ability to store and save songs on the cloud, users can conveniently listen to their favorite tracks whenever they want.

Additionally, the web app supports the iOS music controls and will also continue the playback of tracks even when the browser is minimized. Apart from the aforementioned capabilities, the interface hosts a number of elements for convenience in navigation such as browsing through artist, albums, playlist and also a search feature. What’s more, the web-based application could possibly become a competitive rival to the native music player within the OS. Although available for iOS device, users will still miss out on certain features such as offline playback.

The HTML 5-based Google Music Beta web application for the iPhone, iPod touch and the iPad is currently limited to users within the U.S. only. Also, with the ability to store 20,000 songs in the cloud, the service being in its beta stage is accessible through an invitation that can be requested from the official website.