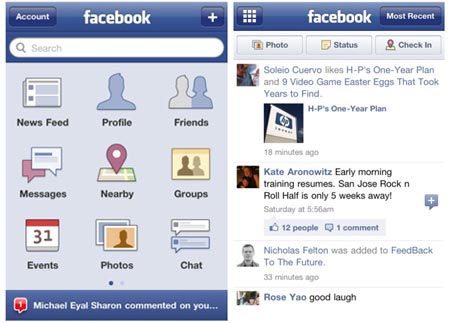 The Facebook for iPhone app is in the news owing to the latest update that brings in some major changes and bug fixes. v3.5 says it’s now easier for users to share content with the people they want and there’s the usual ‘improved performance and stability overall’ to expect as well.

iPhone users can now tag friends and places in posts and also share external links from the web view. What’s more, the sharing tool has been reworked too. It allows users to add privacy controls on posts and even match the settings on the website. In terms of design improvements, only the Profile and Group Walls are on the receiving end of a makeover.

But there’s an explanation for calling this Facebook app update a big one. There’s still more to talk about. Apart from being touted to offer better overall performance and stability, a handful of bothers have been fixed. The Notifications function has been awarded a speed bump, according to what’s listed under the improvements and bug fixes.

Additionally, those who’ve been coming up against the Notifications bar disappearing for absolutely no explicable reason may just want to update to v3.5 which promises to take care of this. Topping this off are the Chat function and the Photos section which have been given a number of big fixes the new version of the app.

The Facebook for iPhone app can be downloaded from where else, but Apple iTunes. It’s a free, 7MB application that works with iOS 3.0 or higher devices.