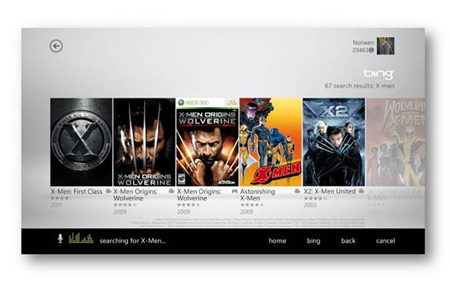 Things have just gotten better for people who’re wedded to mediums that keep their entertainment life on toes. The new Bing on Xbox has been announced by Bing to offer users control over their televisions.

Revealed at this year’s E3, the new service brings games, movies, music, TV shows and other content on users’ console through services like Netflix, Hulu, and Zune. Programming and on-demand options are made available as well by the virtue of cable and satellite providers.

Utilizing such content in conjugation with the power of Bing’s deep search expertise, Microsoft’s Tellme’s voice technology and Kinect’s capabilities, the software will be enabled to put forth instant access to the expansive catalogue of entertainment options on Xbox Live. By taking advantage of the integrated voice search feature, users can conveniently settle upon what to enjoy than where and how to find it.

Quite interestingly, merely saying ‘Xbox Bing Lego’ will display all the available options for the movie, music, game and other matches around that particular title. Users can also effortlessly select, browse or refine their search using voice and hand gestures.

The feature-loaded voice search with Bing on Xbox will be made available in Australia, Canada, France, Germany, the Republic of Ireland, Italy, New Zealand and Spain in the near future.