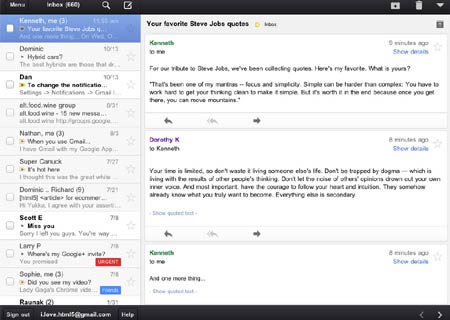 November 2 saw Google completing the long expressed wishes of many Apple device owners by finally introducing the Gmail app for iPhone, iPad, and iPod touch. However, the joy was short-lived owing to a displeasing event that followed – the app was taken off the store, citing bug problems as the reason for it.

This official app for Gmail was probably sought after by many iDevice users for quite a long time. But Google as well Apple didn’t seem quite in the mood for it till yesterday, when it was finally announced and made available for downloading. But within the next few hours on the same day, it was pulled off to get it fixed for bugs.

“Earlier today we launched a new Gmail app for iOS. Unfortunately, it contained a bug which broke notifications and caused users to see an error message when first opening the app. We’ve removed the app while we correct the problem, and we’re working to bring you a new version soon. Everyone who’s already installed the app can continue to use it,” updated Matthew Izatt, Product Manager on the same Google Blog post that announced the release of this application.

It was said that a bug happened to be causing an error message when the app was first opened. Google promised to repair it soon and introduce a newer, better version of this app, which is expected to deliver no such problems. As for Apple, this is the second news of bugs fixes related to iOS devices. Prior to this, the company finally acknowledged the battery drain causing bugs in iOS 5 and released a version 5.0.1 for developers.

The Gmail app for iPhone, iPad, and iPod touch was made to be compatible with the iOS 4 and later versions.