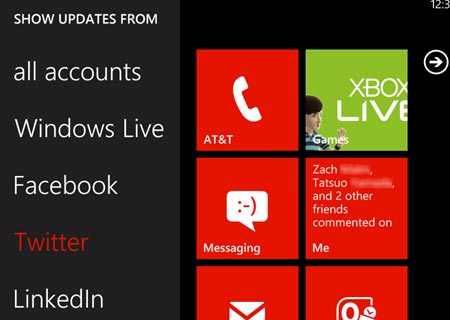 Now that the first handsets based on Windows Phone 7 Mango have been revealed, it’s only obvious for the twitterati to wonder how Twitter will work in Mango. The official Windows Phone blog lends a helping hand with all the nitty-gritty of posting to the microblogging site detailed.

Communication via Twitter is much different from what’s seen in Facebook and seamless integration appears to have been a priority. In Windows Phone 7.5 (Mango), flexibility while posting to Twitter is the highlight. Take the People Hub for example, it offers quick and easy ways to filter feeds so that Twitter and Facebook can be managed separately.

Those familiar with the Me Card tile will see it transforming into one of the most useful ones on the Start screen in Mango with Twitter. Users get a neat notification on their Tile every time they’re mentioned on both Twitter and Facebook. Simply tapping and flicking to Notifications throws up updated content.

The seamless experience is taken a step ahead with the Me Card showing a ‘What’s New’ option which is like a personal feed to social networking activity in the chronological order. The Profile pivot is another handy tool that enables users to check in or post a message. Users have the choice of posting either or both to Twitter and Facebook conveniently from here.

Most of these features are enabled on a host of devices these days, but it is the fact that the OS allows all of this without the need to open an application that’s likely to make them all the more usable. Twitter in Mango is more like a service plug-in according to the blog.