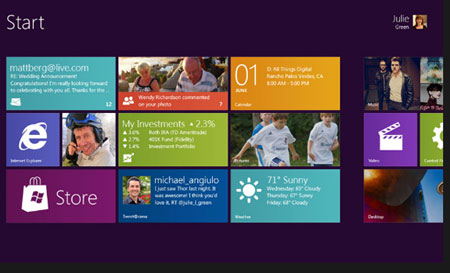 With a major part of MMI on its way to adopting more fluid touch-enabled technology, it’s easy to see why Microsoft chose to deliver a Windows 8 OS which is optimized for touch-centric hardware, at the Computex 2011. There’s also the tablet angle that the company is obviously looking at with the forthcoming release.

The company hasn’t actually put a label to the new OS and Windows 8 is just touted as an internal codename for the present. The user experience ought to put a fresh spin on how applications will run on the OS since the controls are expected to work in harmony with hardware. What’s more, developers will be able to avail of web technologies like JavaScript or HTML5 in order to build applications for the PC.

“Our aim with ‘Windows 8’ is to make the user experience a natural extension of the device, from the time you turn on your PC through how you interact with the applications you know and love. This represents a fundamental shift in Windows design that we haven’t attempted since the days of Windows 95, presenting huge opportunities for our hardware partners to innovate with new PC designs,” remarked Mike Angiulo, corporate vice president of Windows Planning, Hardware and PC Ecosystem.

The recent demo which included several prototypes running the OS was also aimed at marking out its ability to rub along with not just x86, but also ARM-based architecture. It was back in January when Microsoft, Intel, AMD, Nvidia, Qualcomm and Texas Instruments declared that they were going to start chipping away at the next version of the OS.

As for now, developers are being encouraged to create apps for Microsoft Windows 8 with registrations for the BUILD developer conference already open. Pricing and availability details of the OS will have to wait.