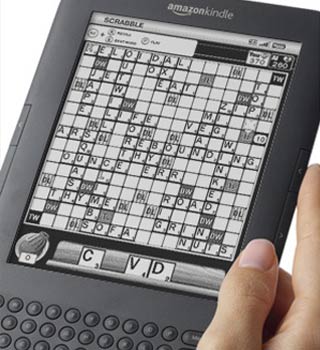 Traditional board games like chess and monopoly have already made their way into the digital world. Swinging in yet another board game, Amazon has now released a new Scrabble game application for second and third generation Kindle as well as both DX models.

Snoozing in with simple controls, the application enables users to enjoy the word game to the fullest. Whether users have played the game before or not, this novel app allows them to pass n’ play Scrabble with their friends, against the Kindle, or a solo game. Be it traveling in a train or laying lazily on some couch, this offering livens up the game playing experience with the astute Best Word feature which helps users create the highest scoring word possible.

Interestingly, the latest game renders the capability of pausing the game and saving it for later use. Users can simply sharpen their vocabulary skills and score higher each time by racking up double and triple word scores. To notify, this Scrabble game app is presented by Electronic Arts.

According to some Internet sources, the new Scrabble App is priced at $4.99.