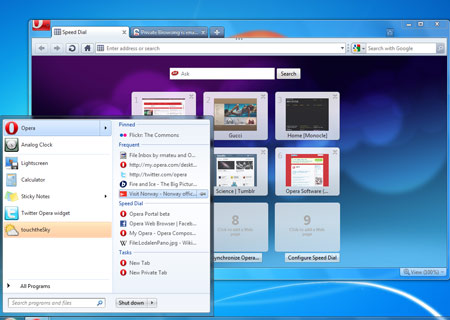 Opera browsers seem to be fast gaining popularity. At least the company’s latest announcement suggests so. Yes, Opera proclaims that the Opera browsers are now employed by over 100 million individuals across the world. It claims to include about 50 million desktop users and 50 million mobile users.

Having attained this milepost in March this year, the company reveals that Opera lovers on Windows, Mac and Linux computers are nearly 50 million. Additionally nearly 50 million users are said to make the most of Opera Mini on a range of handsets each month.

Reportedly year-on-year growth ascertained from March 2009 to March 2010 for Opera browser on desktop is now above 30 percent. Also the number of desktop users measured during March 2010 revealed an astounding 50 million unique active users. Besides many more Opera users also browse the Web through their game consoles, connected TVs and set-top boxes.

“Our focus on speed, security, innovation and usability continues to yield results. We always listen to the needs and wants of our users, and they reward us by choosing Opera,” remarked Jon von Tetzchner, Co-founder, Opera Software.

“Opera’s record growth shows that we are on the right track, and that as user needs grow, we are growing right along with them,” added Lars Boilesen, CEO, Opera Software. “Opera for Desktop delivers the fastest browsing experience on the planet, with a visionary approach to features and a user-friendly design.”

According to the company, the browser’s record growth is believed to have been achieved post the roll out of the Opera 10.5x generation. The company also claims to sit securely as the fastest web browser with its JavaScript engine showing of speeds more than seven times its predecessor Opera 10.10.

Besides being a super-fast browser, Opera for the desktop also bundles in a range of innovative and cost-efficient attributes. This includes Opera Turbo, Opera Unite, Opera Link and more. As for the Opera Mini browser, it delivers a unified and simple interface that allows seamless switching between the desktop and mobile.