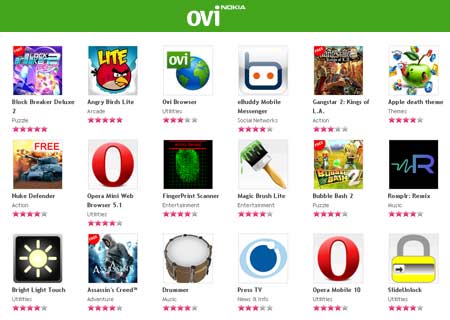 Since its worldwide launch last year, the Ovi Store has been dishing out loads of applications, mobile games, videos, ring tones and images for Nokia devices. The service reaches 140 million users all across the globe with over 200,000 signing up each day to Ovi. With that covered, the company further reveals that the Ovi Store has hit the milestone of 2.3 million daily downloads.

The offering can be procured in over 190 countries and can be found via Music, Maps, Store and even Life Tools in some parts of the world. Nokia claims that 70 publishers and developers have also crossed the million download niche for their respective enticing content spread across the store. These include companies like Electronic Arts, Digital Chocolate, Indiagames, Qik, HeroCraft, Gameloft, PepsiCo, Shazam and Offscreen Technologies.

“At Nokia, we believe that connecting people with great mobile experiences is at the heart of what Ovi is all about,” commented Tero Ojanpera, executive vice president, Services, Nokia. “Today people discover Ovi through Maps, Music, Messaging, Store and Life Tools. With a new generation of amazing devices, like the Nokia N8, developers are looking at Ovi as a good business decision and a chance to innovate and create next-generation mobile experiences for our family of new Symbian smartphones.”

The Ovi Store features content creators plucked from various parts of the globe such as Africa, Europe, the Middle East, China, United States and Asia Pacific. The company also boasts of providing an updated Ovi Store experience which will debut on the Nokia N8 and endowed onto the complete range of Symbian smartphones.

Developers are further treated with enhancements such as new development tools like in-app purchase and beta in-app advertising programs as well as free Java and Symbian signing. The Ovi Maps are continuously expanding and includes more new features with the walk and drive navigation unveiling for 78 countries and in 46 languages.