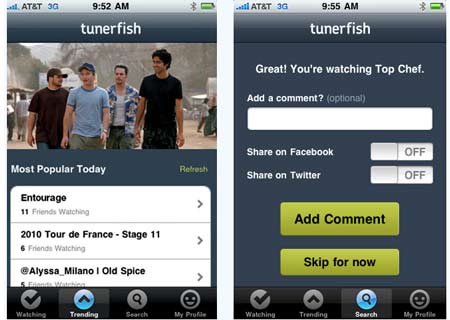 Coining better ways for users indulged in tweeting or updating their status on some networking site appears to be quite natural for developers who realize the significance of being connected. Now, Tunerfish has rolled out its new app for iPhone which enables users to share their TV passions with friends and family right from their mobile device, reveals the official Tunerfish blog.

Users who earlier needed a portable computing solution around their TV sets to share what they are watching can now take advantage of this new mobile version. Designed for Apple’s highly elegant iPhone and iPod, the new Tunerfish app is a social discovery engine for TV, movies, and online video. With this new app easing off on the smartphone’s screen, users can effortlessly share information via Twitter and Facebook.

Users can also view what their friends are watching and rate TV shows according to the rising or falling popularity amongst their friends. With this new offering, iPhone users can share all the entertainment happenings with their friends even while they are at a movie theater or at a sports bar. Apart from this, users can activate their Tunerfish account via Twitter or Facebook and earn fun awards for their profile.

The free Tunerfish app for iPhone can now be downloaded from Apple’s App Store.