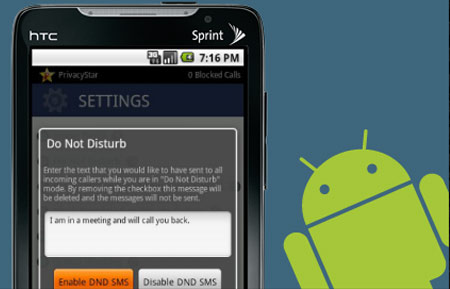 With ‘meeting and greeting’ of users being swimmingly accessible through mobile devices, the rising concern for privacy is also becoming visible. First Orion has recently released a security application for calls on Android smartphones, the PrivacyStar application.

This feature-rich privacy application provides unlimited call blocking, Caller ID, and is capable of reporting about violators of Do Not Call laws to the relevant authorities in the United States and Canada and new to mobile phones. Users can simply use this app just after downloading it because of PrivacyStar’s versatile call blocking functionality. Users can also easily block individual numbers, entire area codes or all private and unknown numbers for ceasing unwanted disruption.

“We are excited to introduce PrivacyStar to the Android community. PrivacyStar offers a host of features that will appeal to everyone who wants to increase the functionality of their phone, from unlimited call blocking to our newest, groundbreaking addition – Caller ID. PrivacyStar is the first app that provides mobile users with the same Caller ID service that consumers typically have on their landline phones,” shared Jeff Stalnaker, CEO of First Orion.

After receiving an unwanted call, users have to select the number from the call activity list in PrivacyStar and add it to the Privacy List for blocking the number. PrivacyStar app displays the name of the calling party when the Android smartphone rings for users to make a choice to accept or reject the call.

Caller Lookup allows users to identify unknown callers by name and take appropriate action. The app’s feature-set includes SmartBlock which blocks the most blocked numbers as determined by all PrivacyStar users for added convenience. Interestingly, users can receive voicemails for all non blocked incoming calls when they are busy as well as can send automatic texts acknowledging the call with ‘Do not Disturb’.

All PrivacyStar settings can be managed with the PrivacyStar account including unblocking from a personal web portal that is automatically synced with the device. Also, this app captures detailed information about possible telemarketing violations, including date, time, number and identity. The recently unleashed app also automates the process of supplying this information to law enforcement authorities for further action if needed.

Users can snap up PrivacyStar for Android for a free 7-day trial period from the Android Market. The app is then available for $2.99 per month or for discounted semi-annual and annual periods.