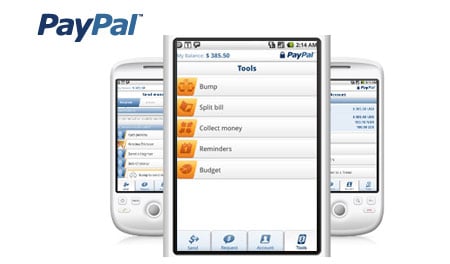 A common thing to do with new versions of Android applications is have them match up to their iOS fellow mates. At least that’s what we’ve seen with the most recent Android app updates. Version 2 of the PayPal mobile app for Android too keeps to the trend. Among other features, this latest version now includes the bump to pay technology, a feature familiar to the iPhone.

The official PayPal blog cites this new Android version of PayPal Mobile with the included bump technology allows a simple tap on two phones simultaneously to send money. The app also sports a split the check feature. This automatically calculates the sum cost of a bill to go on and collect money straight from a number of people.

The app sure looks like its all ready to make sure users get paid back right on the spot without any hassles. Imagine how much of a help it would be when out for dinner with friends. Yes, being stuck when picking the tab could just be a thing of the past. It’s interesting to see how technology is actually rendering it effortless to shell out money.

The free and easily downloadable app is available now in the Android Market.