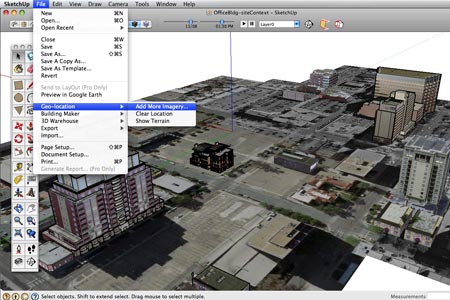 Who could forget SketchUp’s tagline when it first debuted in August 2000? Reading ‘3D for Everyone’, the 3D content generation tool sure made a point. An announcement by Google VP of Product Management John Hanke and SketchUp Product Manager John Bacus now reveals the launch of Google SketchUp 8. A slew of new features in the latest version should up the ante for enthusiasts and 3D modelers.

Geospatial modeling includes a revamped workflow which may be essential for both Google Earth modelers and professionals. Seamless access to advanced imagery and terrain data straight from Google Earth will benefit modelers while the direct access to Google Building Maker renders modeling of prevalent structures effortless.

Users are also proffered a completely new assortment of Solid tools to conduct general ‘Boolean’ modeling operations. By helping ascertain the volume, this attribute may particular hit a note with engineers, product designers, math educators and others. With the new tools, modelers can develop 3D forms that may otherwise to be difficult to generate. It could further save time for more than a handful of SketchUp Pro users.

The application also packs in a range of additions in LayOut 3. Along with an export path to DWG / DXF 2010, there’s also a SketchUp Pro 8 companion application that helps 3D models transform to scaled drawings and presentations. This includes drafting, dimensioning and annotation tools. The new tool was unveiled in Boulder, CO during the bi-annual 3D Basecamp.

Google SketchUp 8 can be availed of in English, French, Italian, Spanish and German with support for more languages to be added in the coming weeks. SketchUp Pro is tagged at $495 and for upgrades from any earlier version users will have to shell out $95. A powerful version of SketchUp is still also available for free.