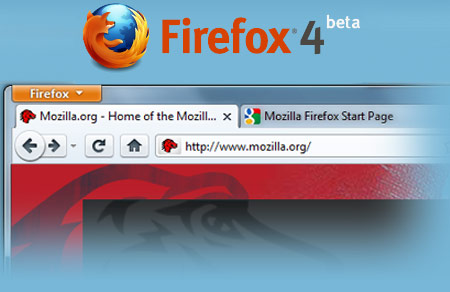 While stats and speculations suggest that Mozilla needs to brace itself and face the threat that Google Chrome poses, the past few months have been punctuated with a number of beta releases of the Firefox browser versions. The last one to surface was the Firefox 3.6.4 beta upgrade. Now the official Mozilla blog has declared the availability of Firefox 4 Beta 1 which makes for an early peek into what’s cooking for Firefox 4.

Windows PC users can expect a reworked interface with the tabs removed to the top. For Windows 7 or Windows Vista patrons, just one Firefox button sits pretty in place of the Menu bar. Mac and Linux users will have to wait patiently for these changes. Web developers can share in the excitement with the HTML5 parser, IndexedDB, WebSockets, simpler add-on development and the Web Console analysis tool.

Apart from the redesigned appearance, users can customize the browser with a new Add-on Manager, protect browser history better, avail of uninterrupted browsing with crash protection and satisfy their need for surfing speed. The developers have steered clear from letting users believe that everything that’s part of this beta will turn up on the final version of Firefox 4. Giving feedback is just a click away with the Feedback Add-on and the Mozilla Labs’ Test Pilot will wring out additional information from willing candidates.

Firefox fans can lend a helping hand to the developers over at Mozilla who seem bent on making the next version of this browser the best one ever by downloading its beta version for free and providing feedback. On the whole, the new interface does look neater and takes away the tab distractions while web browsing.