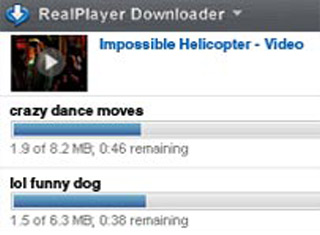 Media player lovers can now wake up to some good piece of news. RealNetworks has made public the global launch of the novel RealPlayer SP. This all-in one media player offers a host of new features to its users such as sharing content or transferring videos to portable devices. It also enables users to download videos from the internet after which they can choose the appropriate mobile device from the drop-down list.

After attaining the favorite internet videos, users can share them with their friends via Twitter and Facebook. Also, web-based videos can be converted to the suitable formats for devices like iPhones, iPods, BlackBerrys, the T-Mobile Sidekick, Nokia smartphones and the Xbox.

“Using RealPlayer SP, it is really simple to download and transfer web videos to your portable device and we’re excited to see the number of people already using the product during its public beta period,” shares Piers Heaton-Armstrong, Vice President of Global Consumer Business at RealNetworks. “With today’s global release of RealPlayer SP, consumers around the world now have an easy way to take their favourite videos with them to enjoy on-the-go and share with friends.”

In addition to this, the RealPlayer also coverts videos into audio-only tracks if the devices lack video support. As of now it supports only the Window systems that run on Internet Explorer, Google Chrome or Firefox.

The RealPlayer SP is available as a free download. However, by shelling out €29.99, users can buy the player along with upgrade support to h.264 video conversion, DVD playback and DVD burning.