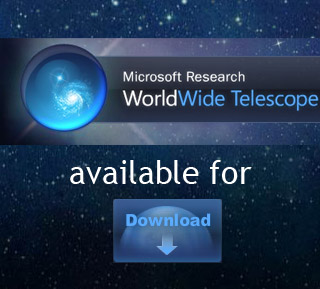 The tool will especially be useful for children to learn more about the universe. It will allow them to pan and zoom around the sky delivering rich images. The WorldWide Telescope features terabytes of high-resolution images of the space and it displays them in a way that relates to their actual position in the sky.

“The WorldWide Telescope is a powerful tool for science and education that makes it possible for everyone to explore the universe. By combining terabytes of incredible imagery and data with easy-to-use software for viewing and moving through all that information, the WorldWide Telescope opens the door to new ways to see and experience the wonders of space. Our hope is that it will inspire young people to explore astronomy and science, and help researchers in their quest to better understand the universe,” said Bill Gates, Chairman of Microsoft

Astronomy enthusiasts can easily browse through the solar system, galaxy and beyond. Also there are guided tours hosted by astronomers and educators at major universities and planetariums.

The application is a blend of software and Web 2.0 services created with Microsoft’s high-performance Visual Experience Engine.

That’s not it. Users can further opt to look through their own choice of telescope including the Hubble Space Telescope, the Chandra X-Ray Observatory Center, the Spitzer Space Telescope or others.

Not only the current situation of the sky, but users can also view past, present or future locations of planets. Also, they can view the universe through different wavelengths of light to reveal hidden structures in other parts of the galaxy.

“Users can see the X-ray view of the sky, zoom into bright radiation clouds, and then cross-fade into the visible light view and discover the cloud remnants of a supernova explosion from a thousand years ago,” said Roy Gould, a researcher at the Harvard-Smithsonian Center for Astrophysics. “I believe this new creation from Microsoft will have a profound impact on the way we view the universe.”

Astronomy enthusiasts can download the WorldWide Telescope from http://www.worldwidetelescope.org.