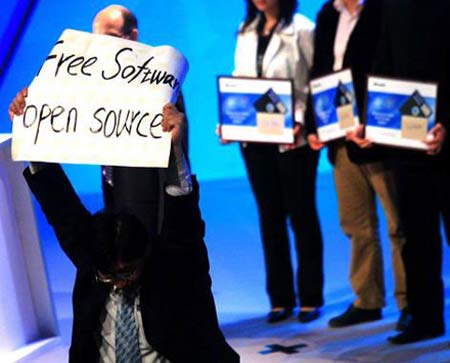 We had reported today, that Bill Gates gave a speech at the annual Boao Forum in China. The next day, while Microsoft’s chairman addressed those present, an open-source software activist crashed Gates’ speech.

This protest by the came just a day after Bill Gates announced his company’s plans to sell 3$ student software suites to developing countries. Perhaps the open-source supporter who stormed onto the stage saw this as an attempt to counter Linux and other open-source software in the developing world.

The unidentified man walked up on the stage as Gates was handing out prizes to students. This man held a banner over his head that read “Free Software, Open Source.” He was promptly tackled by the security and taken away for questioning.

A guard and staff got the protester out of the room and he kept shouting “Open source!” and “Freedom!” Gates did not respond to the protester.

Rumors are rife that this protestor might have been a member of the Linux Professional Institute.