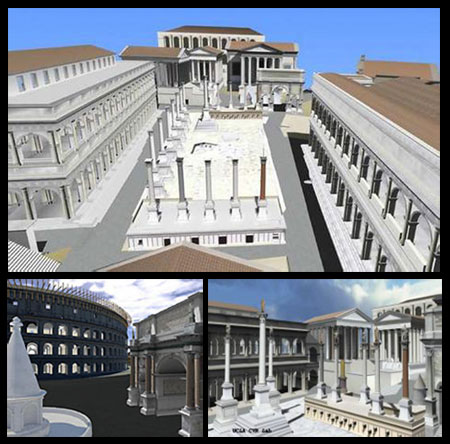 Rome- a culturally and historically rich place may always be crowded with tourists and its monuments battered by time and damaged by pollution; but the glory days of this ancient civilization are very much alive thanks to a bunch of computer experts.

On Monday, experts from around the world, unveiled what they call the largest and most complete simulation of a historic city, which digitally recreates Rome just how it appeared at the peak of its time, AD 320.

Called “Rome Reborn 1.0”, this 10-year project based at the University of Virginia and begun at UCLA, uses advanced technology to digitally rebuild ancient Rome. For this project, an international team of archeologists, architects and computer specialists from Italy, the US, Britain and Germany were employed to build this virtual world.

The saying: when in Rome, do as the Romans certainly does NOT apply here because visitors to virtual Rome will actually be able to do ‘much more’ that what ancient Romans did, as they can crawl through the lower levels of the Colosseum, filled with lion cages and primitive elevators. They can even fly up for a detailed look at inscriptions on top of triumphal arches.

According to Bernard Frischer of the University of Virginia, who led the project, “This is the first step in the creation of a virtual time machine, which our children and grandchildren will use to study the history of Rome and many other great cities around the world.”

The simulation program of Rome reconstructs around 7000 buildings at the time when Emperor Constantine ruled, and the same time when Rome was a flourishing city of around 1 million people.

Guided by laser scans of modern-day Rome and advice from archeologists, the computer designers have rebuilt almost the entire city within its original 13-mile-long wall using the same computer programs that architects use to plan new constructions, he said.

It even includes the interiors of around 30 buildings that include the Senate, the Colosseum, and the basilica built by the emperor Maxentius in all their grandeur with frescoes and decorations.

The simulation shows statues and monuments as they would appear without the dark smudges left by pollution.

The computer specialists also were able to accurately recreate buildings that are now almost in ruins, such as the temple dedicated to the goddesses Venus and Roma and the Meta Sudans, a fountain that stood near the Colosseum, Frischer said.

This 2$ million simulation will be used by scientists to run experiments, such as determining the crowd capacity of ancient buildings, and also as a scholarly journal that will be updated at each new discovery of one of Rome’s marvels.

Besides, Frischer said that students and tourists can use the program to learn more about ancient Rome.