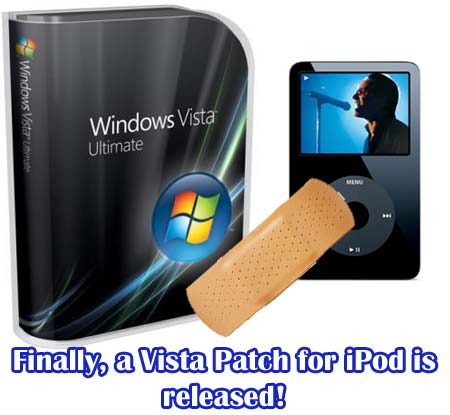 Microsoft has released what they call the final patch for Windows Vista users who have issues with their Apple iPods. This release follows an announcement made way back in February 2007 from Apple, that iPod users should avoid upgrading to Vista in order to prevent corruption when using the ejection feature to unlock the device.

In March, Apple offered a number of patches to correct the Windows Vista issues. However, the company left the ejection bug out of the included fixes.

Shortly thereafter, Microsoft released its own iPod fix, which did don’t actually correct the issue. Thus, this final patch, according to Microsoft corrects the Vista issue completely.

According to Nick White, who posted a message on the Vista Team blog, “Today we’re publishing at the Microsoft Download Center a recommended final compatibility update for users of Windows Vista and the Apple iPod; this same update will be automatically available via Windows Update on Tuesday 22, May. The release is for users worldwide and works with the latest version of Apple iTunes to correct an issue that caused some iPods to become corrupted when ejecting them using Windows Explorer or the ‘Safely Remove Hardware’ function in the System Tray.”

This final patch for the iPod improves compatibility with Windows Vista Safely Remove Hardware feature and Windows Explorer’s Eject command. In fact, in some cases, using either method to disconnect an iPod could corrupt data on the portable media media.

This patch is available for both x86 and 64-bit versions of Windows Vista.

The final Vista patch for the iPod is available as of now on Microsoft’s download site. On May 22, an automatic release of the patch is to be made available on the Windows Update.

This release for the iPod comes just a few days after Microsoft released its Patch Tuesday fixes.