Microsoft has already done it with Windows Vista…and now its Office 2007’s turn. Last week Microsoft announced at Windows Hardware Engineering Conference (WinHEC) 2006 that it would be incorporating an Ultimate Edition to its Office 2007 lineup, just the way it had previously to Windows Vista. The retail package which is priced at $679 USD, is aimed at users who wasn’t to stay away from the confusing task of zeroing on particular Office components they may need. 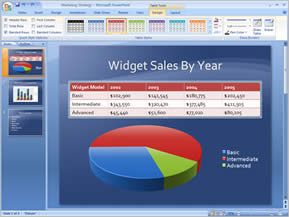 Office 2007 Ultimate is intended for businesses that need all the standard Office applications and then some. It will contain the following software:
• Word
• Excel
• PowerPoint
• Outlook
• Publisher
• OneNote
• Groove
• Access
• InfoPath
The suite is basically a version of Office 2007 Enterprise that will be available to all customers, not just large businesses.

Microsoft claims that it made the decision to release Office 2007 Ultimate based on customer feedback.

Office Professional 2007, meanwhile, features the typical range of Office applications: Excel, Outlook, PowerPoint, Word, Access, and Publisher for $499 USD, or $329 USD when purchased as an upgrade. Office Small Business 2007 offers a similar lineup without Microsoft Access for $449 and $279 USD.

Office Standard 2007 will include the four basic applications as before: Word, Excel, PowerPoint and Outlook for $399 and $239 USD. However, Microsoft has changed the SKU targeted at students and teachers, naming it Home and Student 2007 and replacing Outlook with OneNote. That version will now be available to all users for $149 USD.

On the operating system side, Microsoft will offer Windows Vista Ultimate, which combines all of the features of the Home Premium and Enterprise editions with even more functionality. Ultimate will feature Windows Media Center, Tablet PC support, integrated search, BitLocker disk encryption, Virtual PC, multi-language user interface support, and Services for UNIX.

Windows Vista Ultimate is expected to cost around $450 at retail, possibly increasing operating system revenues for Microsoft if customers opt for the complete package.