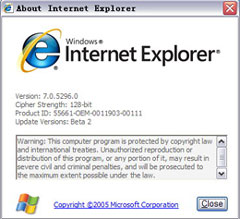 Internet Explorer 7 is being developed for Microsoft’s forthcoming Windows Vista operating system and Windows XP. Microsoft is expected to release IE 7 final for download around the first quarter of 2006.

Apparently Internet Explorer 7 download link was posted on a German Web site. The file of 7 MB in size was linked to download IE 7 and is still circulating on the Internet.

Popular technology website ActivWin.com also posted screenshots of the new Microsoft IE 7 browser, which showcased latest features such as the thumbnail-style QuickTabs and the most-awaited tabbed browsing interface which is available in Mozilla Firefox and other new web browsers.

Microsoft had previously released IE 7 Beta 1 download, which failed to impress everyone. Microsoft’s upcoming IE 7 Beta 2 is supposed to be more secure and offer some of the same features that popular browser Firefox offers.