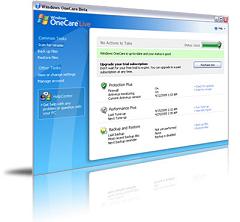 Microsoft Corp. is releasing a new security service called Windows OneCare Live, announced the software giant on Tuesday. Users will have to pay $49.95 per year to avail of this service in order to protect the Windows operating system from spyware, viruses and other Internet attacks.

Windows OneCare Live which will be released by early June will be competing with security products made by traditional Microsoft partners, including Symantec Corp. and McAfee Inc. although the software giant claims that it has not intentions of running those companies out of business.

Ryan Hamlin, general manager of Microsoft’s Technology Care and Safety Group said that instead of changing loyalties what we want is that we should be successful in providing protection for users who don’t have any added or up-to-date security; a group that Microsoft estimates comprises 70 percent of consumer users.

“There’s plenty of room here, kind of, for all of us,” Hamlin said.

OneCare, which is already available for free in test form, aims to protect people running the most recent version of Windows against Internet attacks and intrusive spyware. It also promises to offer regular tuneups to help keep computers running smoothly, and provides users a way to back up and restore data.

The system will automatically update with the latest protections and occasionally add new features, Hamlin said.

Microsoft, whose Windows operating system and Internet Explorer browser are constant targets of worms, viruses and other disruptive attacks, announced more than a year ago that it would offer the paid service. Hamlin said nearly 200,000 people are already trying it out. Anyone who signs up for the test by April 30 can buy the paid service for just $19.95 per year.

The service will initially be available only in English, although Hamlin said the company expects to launch test versions elsewhere in the world over the next 12 months.

Windows Defender would be included with the product, although it is not expected to be integrated into the OneCare console until after the June launch. Annual subscription fees for the service would be $49.95 USD, although beta testers would receive a promotional price of $20 USD for the first year of service.

Analyst Ted Schadler with Forrester Research said the $49.95 price tag is about even, if not slightly cheaper, than rival offerings, although clear comparisons are difficult to make.

He said it makes sense for the maker of the world’s dominant computer operating system to have a product that better protects its customers, but he questioned whether Microsoft would have any more luck than its competitors in convincing more people to protect their systems.

“The big opportunity is to get to people who don’t have any security,” he said, but “Microsoft doesn’t have any better way to get to those people than anybody else.”