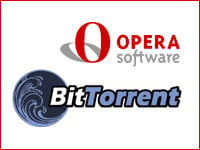 On Monday, Opera announced the details of a plan to further incorporate BitTorrent abilities into a forthcoming version of its web browser. Opera further added that including the technology would not only enhance the speed of downloads but would also result in better efficient downloads of large files. However the move could also antagonise intellectual property holders, who see the network as a boon to piracy.

Opera and BitTorrent have recently signed a contract that would allow Opera to incorporate the file-sharing technology into version 9 of the browser. The company said that a technical preview would be available soon.

Users would be able to search for files on the BitTorrent network through integrated search functionality, which then would use Opera’s Transfer Manager software to handle the download.

July 2005 was when BitTorrent appeared for the very first time on Opera, that’s when the browser had released technical preview with the technology included, version 8.02. Customers responded positively to the transformetion and thus Opera decided to maintain the relationship.

Opera vice president of engineering Christen Krogh said, “Implementing BitTorrent is a natural choice, considering its efficient use of bandwidth and worldwide popularity.”

The file-sharing network will also soon announce that Opera would be the first to be eligible for a program that would allow the company to use the BitTorrent trademark.

In a statement, BitTorrent president Ashwin Navin said, “With BitTorrent Search, Opera will be offering its users a seamless experience for discovering and downloading large files from the thousands of BitTorrent publishers around the world.”

BitTorrent has come under the bad books of intellectual property holders for illegal file sharing between its users. Hollywood threatened BitTorrent with legal action, forcing founder Bram Cohen to strike a deal with the MPAA in late November.

Under the terms of the deal, Cohen added technology to the search engine used by bittorrent.com that effectively removed content owned by the studios that make up the MPAA.

However, the deal had no effect on BitTorrent search engines not controlled by the company, which still list innumerable illicit files.