The trend of social networking that started up in North America is catching up across the globe significantly. As per a comScore Inc. data, the social networking sites like Facebook.com, Hi5 are gaining increasing user base from the Asia-Pacific, Middle East –Africa and other regions. 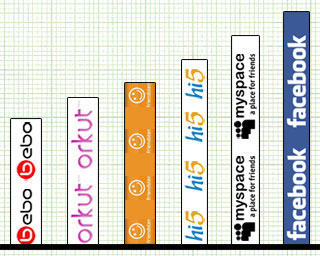 However, the same trend seems to be dying in the region where it created immense impact first.

“While the social networking trend first took off in North America, it is beginning to reach a point of maturity in the region,” said Jack Flanagan, comScore executive vice president. “However, the phenomenon is still growing rapidly in other regions around the world, especially as the established American brands turn their focus to developing markets.”

According to comScore, that measured the popularity of the sites in the digital world, North American user base has shown a growth of about just 9 percent, while the maximum increase comes from the Middle East-Africa region showing 66 percent growth of users using social networking sites. comScore also shows a 35 percent and 33 percent of growth in the consumer base in the Europe and Latin America regions respectively.

One more vital statistics that comScore has provided is that Facebook rules the world. Becoming the top global social networking site, Facebook is enjoying a good 38 percent more user base from North American region that totals up the visitor base to 49 million from the same region. Apparently, the site’s audience has increased by four times with Europe showing 35 million of Facebook monthly visitors in June, a significant rise from the 27 million visitors that it showed last year. This accounts to a whopping 303 percent increase in the same area.

“Facebook has done an exceptional job of leveraging its brand internationally during the past year,” added Flanagan. “By increasing the site’s relevance to local markets through local language interface translation, the site is now competing strongly or even capturing the lead in several markets where it had a relatively minor presence just a year ago.”

Next in line of popularity is MySpace.com followed by Hi5. Hi5 is shows a doubled audience base totaling to more than 56 million and sites like Friendster, Orkut and Bebo.com show an increase in the audience by 50 percent, 41 percent and 32 percent respectively, from all over the globe.