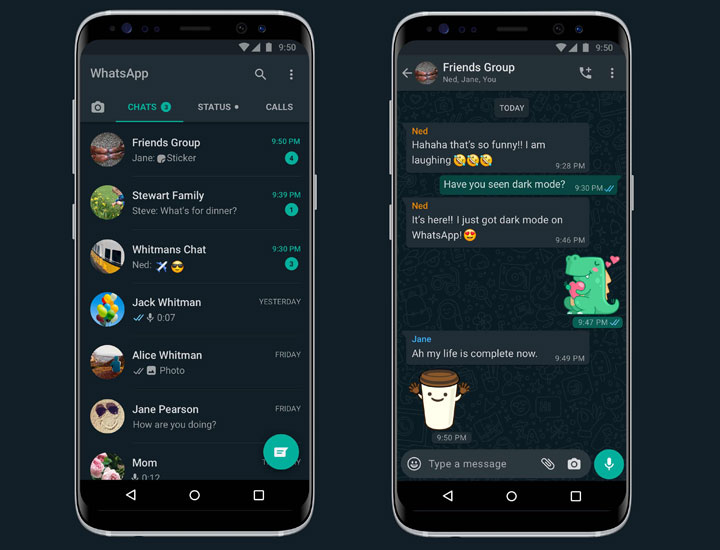 WhatsApp has been inexcusably slow with the launch of its Dark Mode for Android and iOS; so it shouldn’t mind being reprimanded about this belated release. The Facebook-owned messaging company has officially rolled the feature out of beta with the announcement that it is ‘excited’ to update the app with this ‘most-requested’ change.

Android and iOS have been offering dark theme settings since last year. This is why it’s surprising that we’re getting the WhatsApp Dark Mode only now. It’s been in testing for quite a while now considering there have been rumors about this launch being in the works for years. Who knew perfecting the consumer version of it would be so fiddly a task?

The developers say they had to focus on two main areas while coding the Dark Mode into being – readability and information hierarchy. The idea was to minimize eye strain for users who cradle their phones to sleep while scrolling through WhatsApp, and also staying true to the default colors in iOS and Android.

Also see: WhatsApp Private Groups Searchable by ANYONE on the Internet

With regards to the bit about information hierarchy, if facing a bright screen in the dark is not enough to focus your attention on it, the developers have been tuning up the color and other UI design aspects to ensure that the most important information is properly noticeable by you in the app.

The update is being pushed out through the latest version of WhatsApp. Android 10 and iOS 13 users can enable dark mode in their phone’s system settings. Those with Android 9 or lower have to select ‘Dark’ from WhatsApp Settings > Chats > Theme on their devices.

Instagram Fixes Bug That Prevented Photos and Direct Messages From Being...