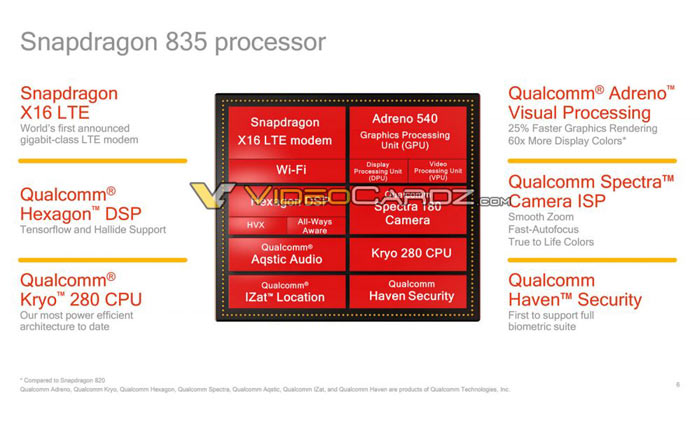 We’re just one day away from CES, but Qualcomm it seems hasn’t been able to stop the lid on its special Snapdragon 835 presentation from being opened. Some slides from this announcement have apparently leaked, giving away crucial details about the all-powerful upcoming chipset.

We already have a clue that it will be built by none other than Samsung, using the advanced 10nm model. The Snapdragon 835 is expected to offer a 27 percent improvement in performance if compared against the Snapdragon 820. It will moreover have a smaller footprint than the said last-gen chip.

Its CPU will feature Kryo 280 cores, and it seems it will be an octa core unit with 4 powerful cores and 4 battery efficient ones. The GPU is of course getting an upgrade as well. The Snapdragon 835 will be sporting an Adreno 540 unit which, according to the leaked slides, supports sixty times as many colors as the most recent Snapdragon chipsets.

This graphics unit is also 25 percent faster in its rendering, while it supports playback for 4K videos at 60 fps, OpenGL ES, Vulkan and even the DirectX 12 standard. The next bit of detail about this upcoming Qualcomm chip is regarding its battery. 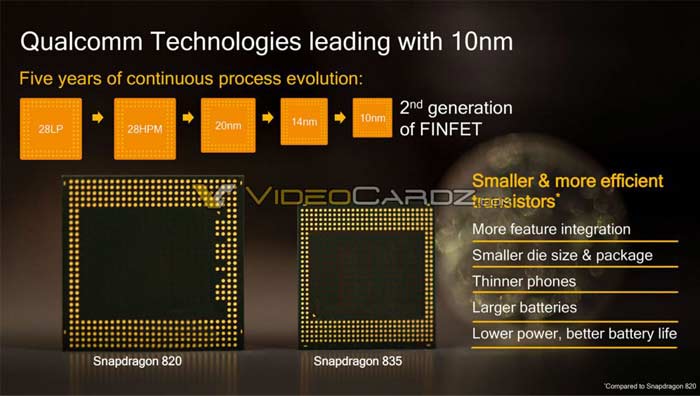 It reportedly boasts of 50 percent less power consumption than the Snapdragon 801. To add to that, the 835 will also bring with it Quick Charge 4 which promises to charge batteries 20 faster than its previous version.

With this just being a leak, we’ll be getting to know a lot more when Qualcomm takes the stage at CES for its grand announcement of the Snapdragon 835. So stay tuned.