Snapchat, the darling app of youngsters all over the world, has been around since 2011 and has only become better and better with age. But we’ll have to admit, it’s not the best out there when it comes to having a straightforward interface.

To add to that, its developers are known to release new features unceremoniously and even worse, hide them deep within the app. Owing to this, a large number of its awesome features still go unnoticed.

We’ll be going through all of them today to ensure that you’re not missing out on anything while using your favorite image messaging application. So sit tight, and get your smartphones out to try out these mind-blowing Snapchat secrets.

Faceswap with anyone in the world 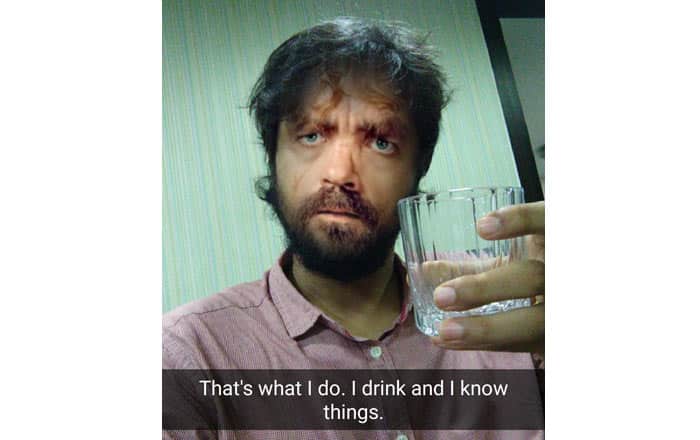 Face-swapping is all the rage at the moment, and Snapchat has been quick to get in on this fun trend. It first introduced the ability to swap faces with someone who is standing next to you, and the app then took this feature to a completely new level by allowing you to swap faces with anyone in this world.

It actually works like this; the app scans your gallery and comes up with all the optional faces in your photographs that you can swap yours with. These may include your friends, family members or anyone whose image you have stored on your phone. 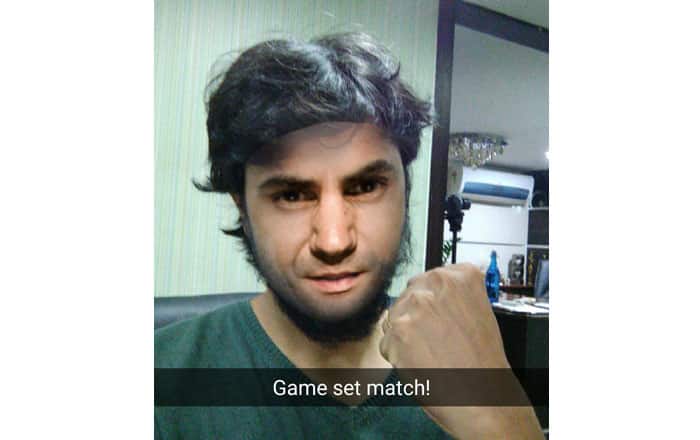 Now in order to make the best use of this, try saving a picture of anyone you want in your gallery and see the magic. No matter if it is Clint Eastwood or Roger Federer or even Jennifer Lawrence, Snapchat will let you swap faces with any of them. 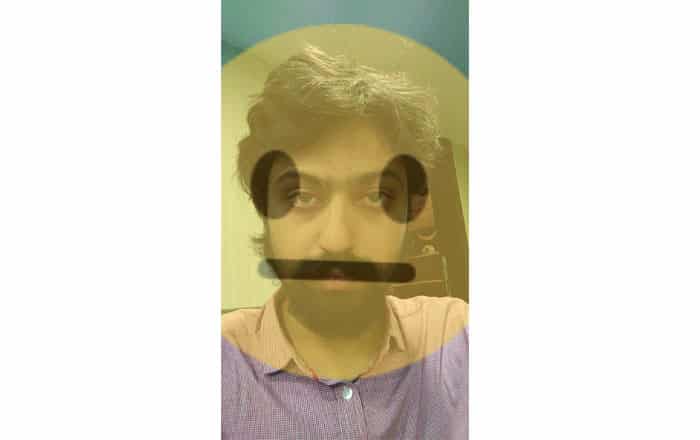 Another great hidden feature in Snapchat is that you can have an emoji overlaid on your image in a transparent (more like translucent) manner. This gives you even more creative freedom while using your favorite app.

Say you want to place a such a smiley on an image you’ve just clicked; you can select it from the emoji menu and enlarge it according to your preference. What you then do is drag that emoji to the dustbin icon up top. Now without letting it go, just press the Send button at the bottom and your transparent emoji will be present in the sent snap.

With this option, you can even save it to your gallery by tapping the Save button instead of Send. The placement of the emoji will not always be according to your liking due to the limitations of this feature, but it makes for an incredible Snapchat trick anyway.


The number of filters Snapchat offers is very limited, but there’s a neat little trick you can use in order to add colorful filters to your images. It’s a trait that hasn’t been designed by the developers but has been discovered by hardcore fans of the app.

This feature is a bit tricky to explain this; so bear with us here. To achieve a filter effect through this method, you need to choose an emoji of your preferred color first. Once the emoji is placed on your image, you need to zoom in on it as much as possible. Note that it will end up covering the entire image at this point.

Now, you need to keep dragging the emoji in order to get to its edges. These edges are pixelated and when blown to such a big size, they turn into filters. You might not get this in the first try, but we’re sure you’ll learn to use it eventually.

Change the names of your contacts 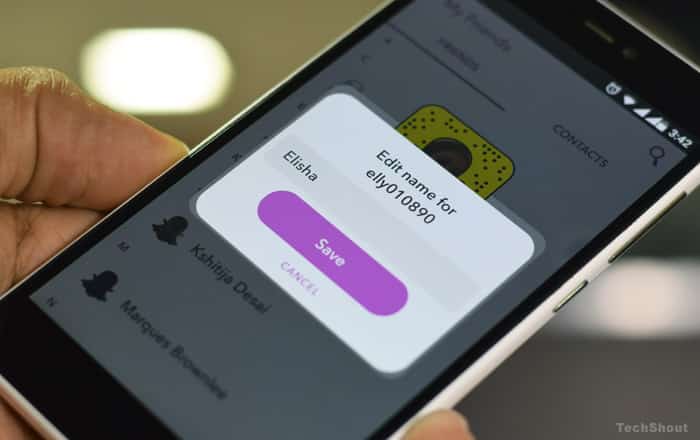 By default, your contacts in Snapchat either get the name that you’ve stored their number with or the name they’ve entered while creating their account. However, you can change both these without affecting your contacts or notifying the other party about it.

So if you’re used to referring to one of your friends by their nicknames, or you just want to call them a different name because of their recent conduct, this feature is at your disposal. It can also help when you want your friend’s name to show up early in the contacts list but it starts with an alphabet like ‘s’ or ‘z.’ You can just add an ‘a’ before their name to make it appear at the top. 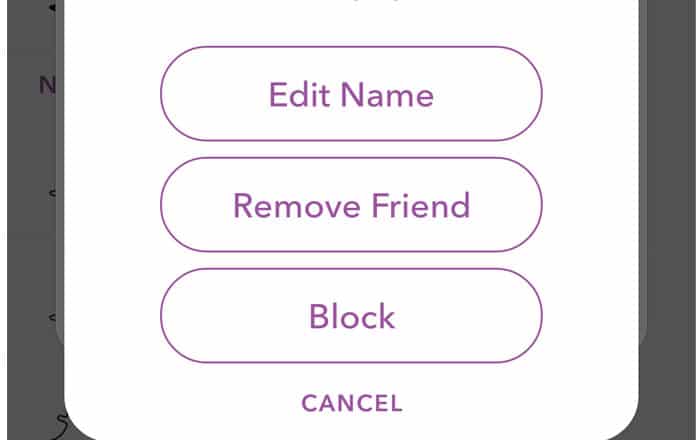 To change a contact’s name, you need to go into the My Friends section, tap on any of your contacts and select the gear icon on the right hand side. This is where you’ll find the facility to change their name, alongside options to block them or remove them from your list. 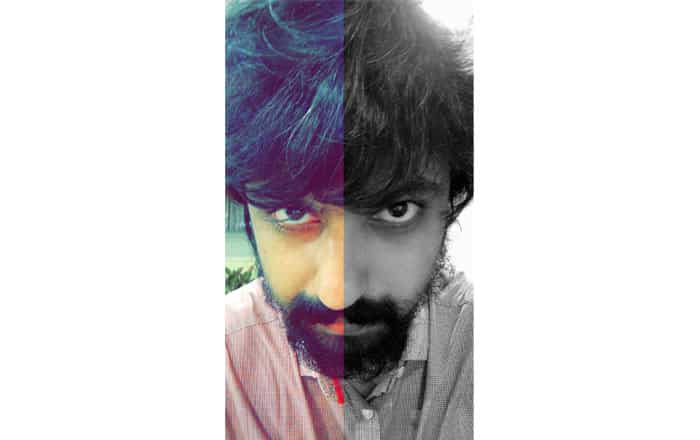 A unique thing in Snapchat not many know about is the ability to add half a filter to an image. This means half your photograph can have the black and white filter while the other half can have the one next to it.

Like all other tricks included in our list, this one too is hidden in plain sight, and makes you wonder how could you have missed it for so long. To achieve it, you can pull a filter towards the center of your image and without lifting you finger from it, press the Pen icon with another finger.

This leaves a small pen mark on the photograph, but that can easily be removed by pressing the undo button once. And bingo, you now have a photograph with two shades on it rather than just one.

Write more in your captions 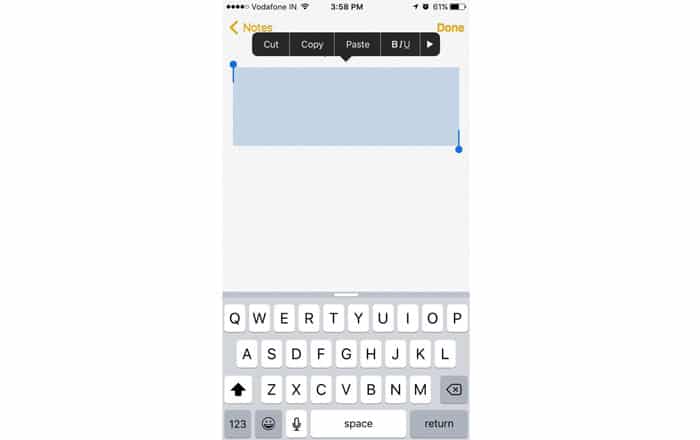 Snapchat’s iconic captions are a beautiful way to describe an image or a video that you just captured. However, there’s a standard limit affixed to just how many characters you can use in them. This leads to the captions being the same small lines placed against a black background all the time.

But there’s a simple method which lets you enter a lot of text into the box. Android users prepare to be disappointed, as this feature can only be taken advantage of by iOS users. 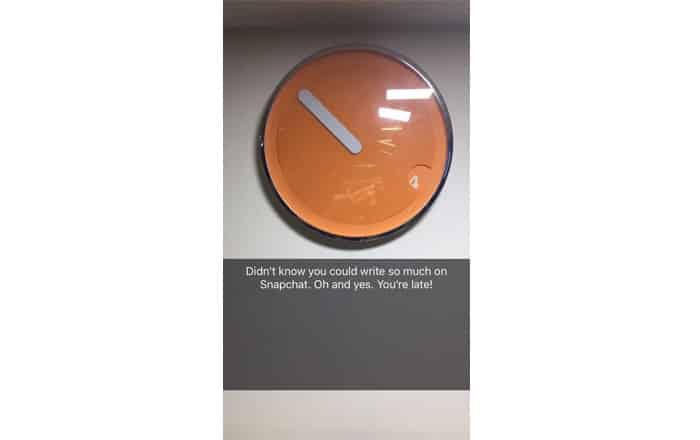 In order to use large captions, you need to head into the Notes app on your iPhone first. There, you must select some blank space of up to 7 or 8 lines and copy it. Go to your caption in Snapchat and paste the blank space there, and you’ll get more real estate for describing your image.

Use two filters at once 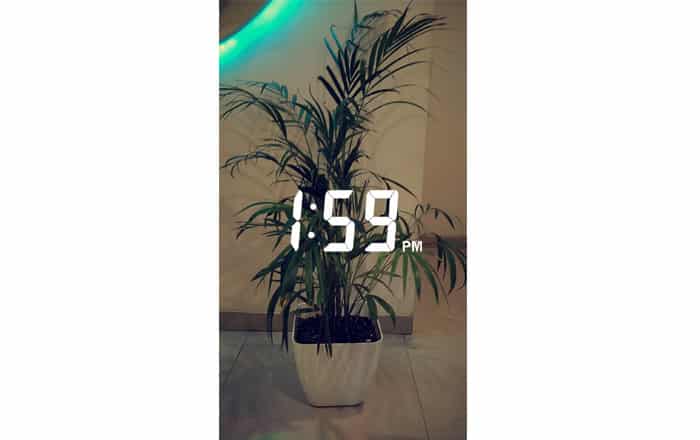 Firstly, Snapchat has a very low number of filters, and the fact that only one can be used at a time is aggravating. Let us tell you about a neat little trick that lets you apply two filters on the same image.

Once you’ve clicked your image, you apply your first filter the normal way which involves swiping towards the left or the right. Once that’s done, you need to keep your finger tapped somewhere on the image, and swipe left or right for summoning another filter.

With this method being so simple, it would have been wonderful if Snapchat allowed a third filter to be placed as well. But that’ll be too much wishful thinking we guess.

Scribble in white and black 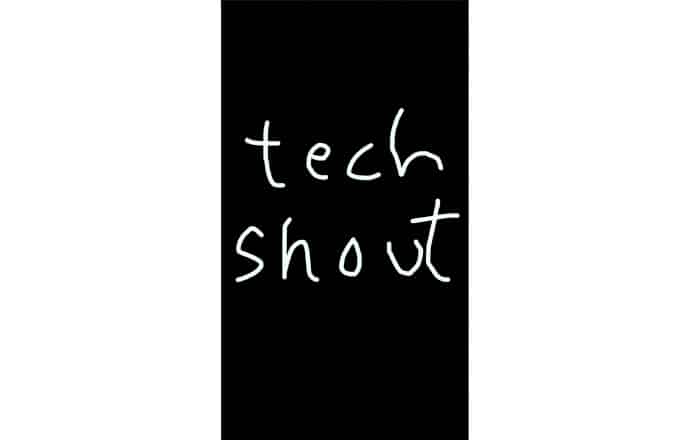 For an unknown reason, iPhone users on Snapchat still can’t select the colors white and black from their palettes while they’re using the pen tool. While both the shades are easily accessible on the Android version’s palette, that’s not the case with the iOS edition of this app.

On the iPhone you will need to perform a strange trick in order to write in black or white. Tap on the palette and instead of dragging down or up, drag your finger to a corner of the screen. You will notice that the color in the pen icon changes to white or black depending upon which corner you chose.

Just play around with this feature a bit, and you’ll also be able to find a way to select a gray color while dragging on a particular area of your screen. Now that you know this trick, it’s time to add some black and white strokes to your doodles. 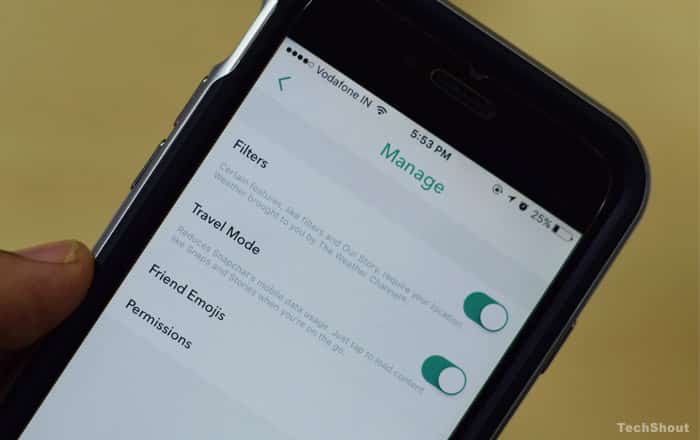 Travel mode is nothing but a data-saving feature on Snapchat which is sort of hidden in the Settings menu. You can activate it by entering Settings and checking the box alongside the Travel Mode option.

As the blurb there will tell you, this feature reduces Snapchat’s mobile data usage by not pre-loading its content. This means you will need to tap on snaps and stories in order to download and view them.

This is a trait that will come incredibly handy for heavy users of Snapchat. Additionally, it can save battery when you’re on the go; as you can decide to download your snaps and stories when you’ve connected your device to a charger to save some juice.

Fake your location with any geofilter 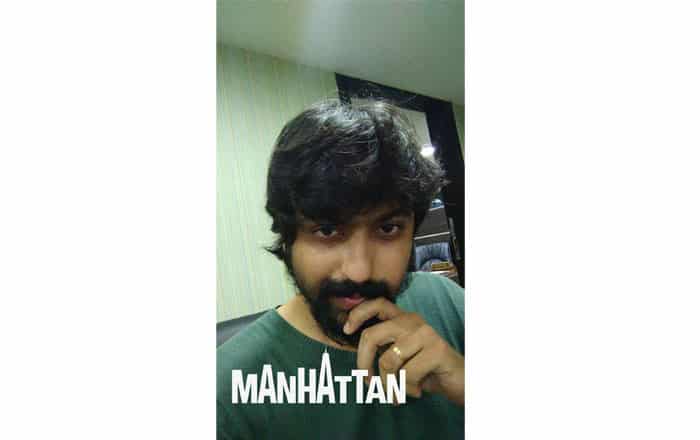 The geofilters on Snapchat change based on your location, and are a great way to let everyone know where you are. But what if we told you that they can be changed to literally any location even when you’re sitting comfortably on your bed?

This way, you can fool your friends into believing that you’re in Paris, or any other awesome place for that matter. It works on both Android and iOS with the help of third-party apps, but the former requires you to do some tinkering with the OS in order to get it working.

Android users must first enable Developer options and activate the ‘Allow mock locations’ feature in them. They can then download an app named GeoSnap which easily lets them fake the device’s location so that Snapchat can offer geotags accordingly. 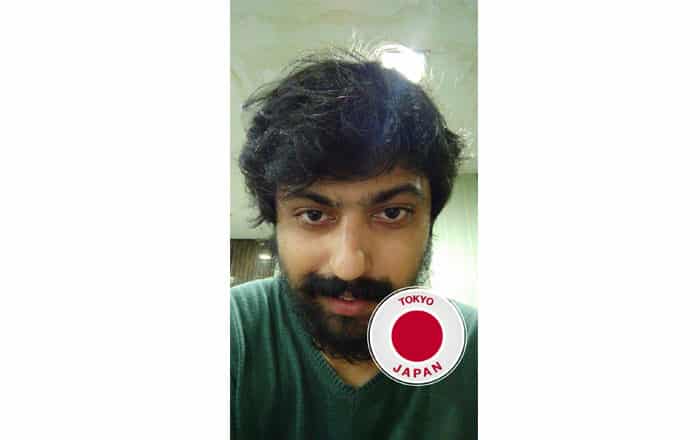 On iOS, the app Phantom for Snapchat will need to be downloaded. Here, you are not required to do anything other than opening the app and following the instructions. It should be noted that this app only works with jailbroken iPhones.

Relive your stories every month 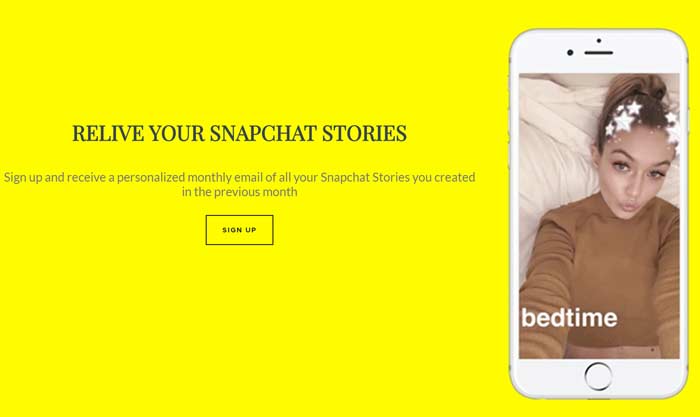 Snapchat Stories vanish after a point of time, leaving you no way to relive them, unless you have downloaded them of course. But for heavy users, these downloads will gobble up lots of storage space on their devices over a period of time.

This is where Snap Memories comes into the picture. It’s a simple service which lets you relive all our Stories at the end of every month. How cool is that? 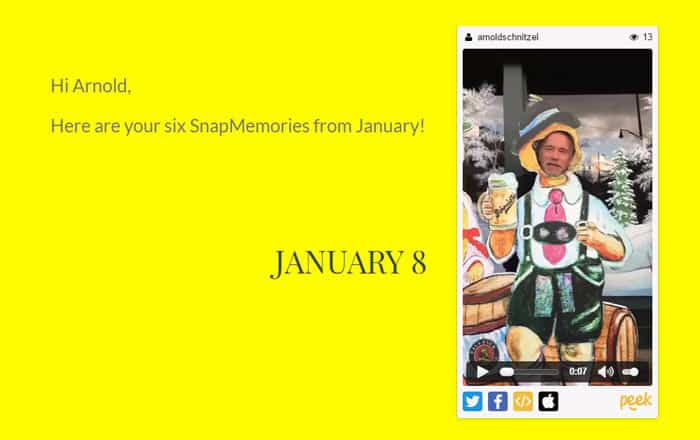 In order to experience it, you need to go into Snapchat’s settings and set the View My Story option to Everyone. Then, visit this website, register with your name and other details, and you’re good to go. All your Stories from the month gone by will now be emailed to you in video form.