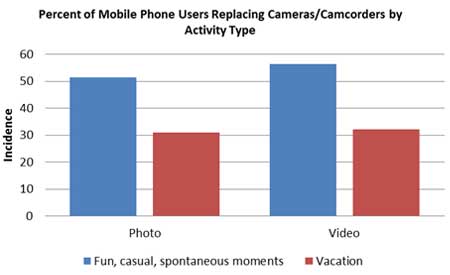 Smartphones seem to have become the preferred choice for capturing photos and videos, apparently making a noticeable impact on cameras and traditional camcorders in the market. This has been brought forth by NPD’s new Imaging Confluence Study conducted in the U.S.

The aforementioned study claims that about 27 percent of photographs have been captured with a smartphone within this year. Last year, the percent recorded was 17, which means that this activity has seen a 10 percent rise within a single year. The scenario is quite different when it comes to the share of content captured by any camera. The number dropped from 52 percent in 2010 to 44 percent this year, when it came to the use of a camera for snapping up images.

“There is no doubt that the smartphone is becoming ‘good enough’ much of the time; but thanks to mobile phones, more pictures are being taken than ever before,” states Liz Cutting, executive director and senior imaging analyst at NPD. “Consumers who use their mobile phones to take pictures and video were more likely to do so instead of their camera when capturing spontaneous moments, but for important events, single purpose cameras or camcorders are still largely the device of choice.”

Apart from highlighting how smartphones have come to become an important tool for capturing images, the study reveals another high point with regards to detachable lens cameras. The detachable lens camera market witnessed an upward trend by 12 percent in units and 11 percent in dollars, again recorded in the first 11 months of 2011, with an average price of $863.

The NPD findings come as no surprise since more and more smartphones flooding the markets have been seen laying emphasis on decent cameras. Today, a lot of cameras embedded in handsets offer users with as many options as entry-level snappers. And such devices probably score higher points than cameras on the portability and multi-functionality front too.