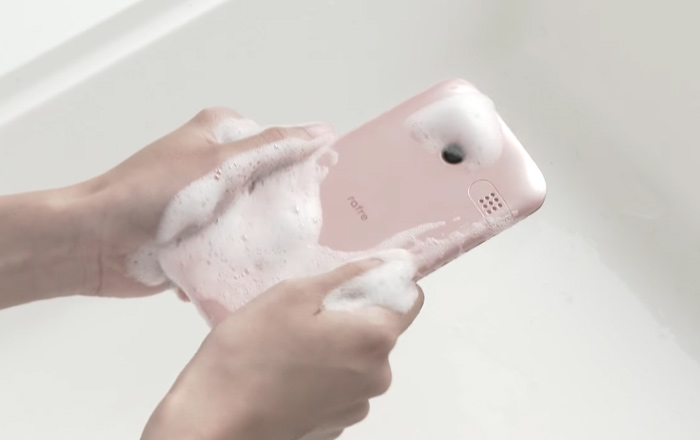 Kyocera made quite an impression back in December 2015 when it came out with a smartphone that could be washed with soap and water. The company is now back with another handset called the Rafre.

Like the original Digno Rafre, the latest Rafre can also resist the damaging effects of water, hot or cold. It’s now been enhanced with protection against foaming body soap as opposed to just foaming hand soap. The new phone’s screen is apparently usable even if a person’s hands are wet or covered with a glove.

All-in-all, users should be able to use the Rafre in rain, during a bath, or while washing dishes in the kitchen. Interestingly, the company’s bundled the device with a cooking app that allows users to scroll through recipes, answer calls, or set timers without having to touch the display via the magic of hand gestures.

Kyocera says this allows for people to operate the phone even if their hands are covered in cooking ingredients. In terms of specs, the phone is mostly a mid-range affair with top highlighted features being its 3000mAh battery and 13MP PDAF rear camera. The latter comes with the brand’s proprietary image-processing AINOS Engine which is meant to ensure clear photos even when there’s less light about.

A quick look at the Kyocera Rafre’s specifications:

Kyocera will sell the Rafre only in Japan starting from March 2017 at an undisclosed price tag. It’ll be available in pink, blue, and white colors.