SmartNaMo Saffron One and Two phablets land in India, up for pre-order

The SmartNaMo Saffron One and Two phones which were announced a few months ago, have been put up for pre-order in India and require Narendra Modi fans to shell out at least Rs 18,000. The former comes in two different variants featuring either 16GB or 32GB onboard memory, both of which arrive drenched in shades of white and black, whereas the white-colored Saffron Two’s only 32GB version is up for grabs.

Those who are interested in laying their hands on the SmartNaMo handsets can head over to Snapdeal and pre-book the gadgets by paying up Rs 999 in advance. They will start shipping sometime in the second week of October. This company had unveiled some other devices of different screen sizes, but nothing has been mentioned about their availability details as yet. 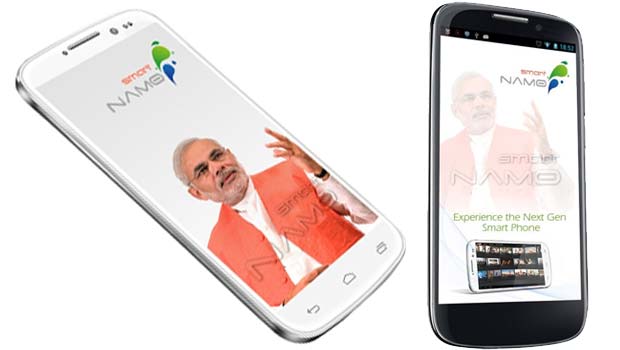 The Saffron One is a 5-inch dual SIM phablet that takes advantage of the Android Jelly Bean 4.2.1 OS and is fueled by a quad core processor clocking in a maximum speed of 1.5GHz. Its 16GB variant has 1GB of RAM for company, while the 32GB one boasts of 2GB system memory. Capable of rendering HD visuals in 1920 x 1080p resolution, the gadget has an expansion slot to increase the storage capacity by up to 64GB.

A 13MP auto focus camera rests on the rear side and a 5MP secondary snapper has been tossed into the mix for video conferencing purposes. Also, a 3150mAh battery hides within the confines of the gadget with dimensions of 142 x 71 x 9.8 millimeters, to keep it charged for relatively long usage time. The dual SIM Saffron 2 is almost the same as the One, but the former offers a multi-touch real estate of 6.5-inches.