A new Smart Namo phablet is slated to be made available in India, along with its 5-inch version that was introduced last week. Word on the street is that the former’s price is likely to be around Rs 21,000. The Namo has been dedicated to Narendra Modi and apart from his name, the moniker also stands for Next Generation Android Mobile Odyssey.

But the information available on the hybrid looks highly suspect seeing as two different phablets are shown under the same name. According to the company’s official Facebook page, this Smart Namo is fitted with a 6.5-inch full HD touchscreen of 1920 x 1080p resolution. Two SIM card slots have been carved out on the chassis and the handset also makes room for dual cameras. A 13MP auto focus snapper has been placed on the rear side for allowing potential buyers to capture decent-quality images and videos, while another 2MP shooter graces the front and facilitates web conferencing on the move. 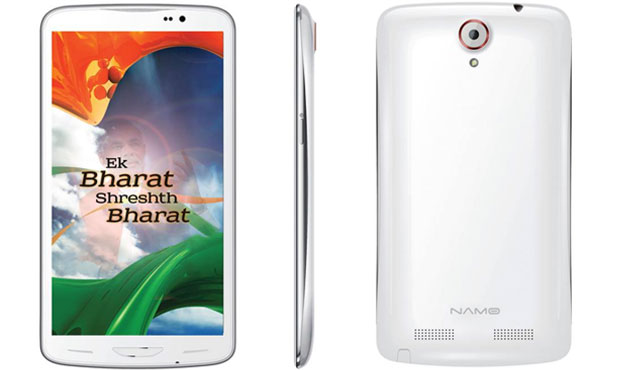 And as the largish phone operates with the assistance of the Android Jelly Bean 4.2.1, it should provide an intuitive user interface as well. Crammed into an exterior with dimensions of 172.9 X 93 X 9.5 millimeters, the Smart Namo acquires steam from a MTK6589T quad core processor sprinting at 1.5GHz. It features 2GB of RAM and 32GB of internal memory and even lets users expand the storage further by up to 32GB via a microSD card. This 3G-, Bluetooth- and Wi-Fi-enabled gadget integrates a 3150mAh battery and has GPS for accurate turn-by-turn navigation as well.

The Smart Namo phablet should go up for sale for the aforementioned price sometime soon.