The world’s largest democracy is gearing up to vote for a new government in 2014 and guess what has come out of all the pre-election show of support? It’s the Smart Namo, an Android handset named after Narendra Modi, one of the most talked about political figures in India at present. Namo also stands for Next Generation Android Mobile Odyssey, according to the official website that offers several details about the upcoming smartphone.

The Smart Namo will be a phablet of sorts, with a touchscreen spanning 5 inches nailed across its front. This display will be layered with a sheet of Corning Gorilla Glass 2 to protect it from scratches and falls. A 13MP camera is also noted among the key features which will be part of the specs sheet. Too bad for those who were expecting a Snapdragon or Nvidia chip to be hidden under the hood – MediaTek’s 1.5Ghz MT6589 Turbo processor will be powering the device. 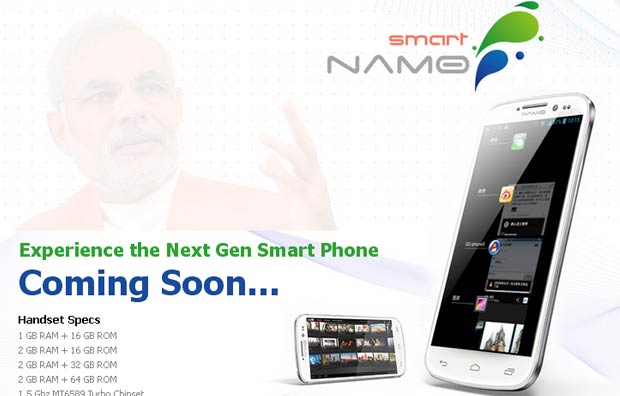 The product page says that potential buyers will have 4 different memory configurations to choose from. People will apparently be able to get the handset with 1GB or 2GB of RAM and 16GB internal storage. Those who pick the 32GB or 64GB capacity can look forward to 2GB of RAM onboard. So far, this is all we have on the specifications of the phone. Even the price hasn’t been divulged.

What we do know is that the manufacturing company is owned by a group of businessmen from Gujarat and it has its foot in the Chinese smartphone market. This Narendra Modi ‘signature edition’ device is coming soon and it also has a Facebook page dedicated to it. Unless we’re sorely mistaken, the Namo will manage to drum up fans for itself by riding on the strength of Modi’s fame.

So who’s publicizing who?