Is this SM-G900S the Samsung Galaxy S5 or Galaxy Round 2?

A new Samsung SM-G900S has cropped up on GFX Bench and going by rumors, it can be anything from the Galaxy S5 to the Galaxy Round 2. But that’s not the most interesting thing about this leak. According to the details available on the benchmarking site, the device will be a high end one with a 2K screen to boot.

You heard that right. This is the second 2K phone of the day and we’re sure the future holds many more. Earlier today, there was a report about a Meizu MX4G with a 2560 x 1536p resolution screen. Well, the SM-G900S and Vivo Xplay 3S are pretty much in the same league, only with 2560 x 1440p displays though. 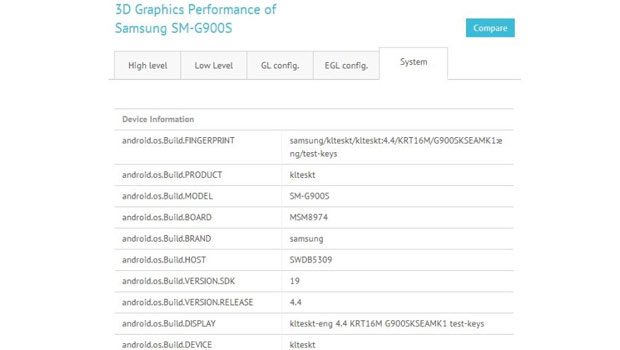 The Droid Guy seems to think the SM-G900S code name is close to the SM-G910 model number carried by the Galaxy Round. Truth be told, we don’t see it. The only argument for the newly uncovered handset not being the Round 2 is that unlike LG, Samsung hasn’t managed to properly launch its first curved screen handset yet. So forget about a sequel.

On the other hand, there’s the remote possibility of this being a market-ready variant of the device, right? At any rate, some of the features surfaced via GFX Bench imply that we’re looking at a high end smartphone. So it could also be the Galaxy S5. The details reveal Android KitKat onboard, a quad core Qualcomm Snapdragon 800 processor clocked at 2.4GHz and a 2,560 x 1,440p touchscreen. 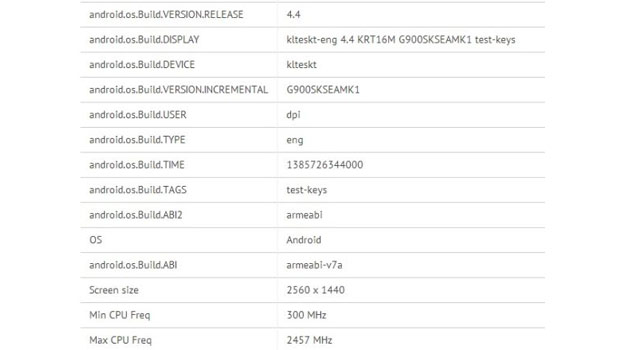