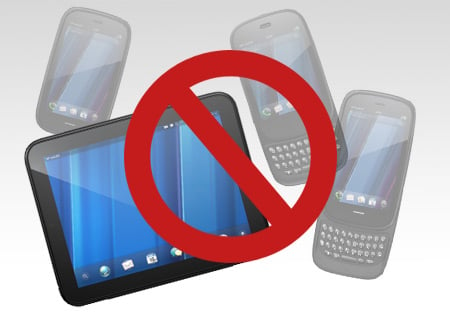 Ok! It wasn’t really a silent death for the HP webOS devices, as it did appear like it was going to happen anyway. Even if there were murmured whispers of ill-fate coming upon the webOS platform soon, not everyone expected it spring up so suddenly. As speculations, rumors and official statements too are all mixed up the scenario must pretty much be a confusing one for both fans and worst still for those who already own a device based on the system. We can’t help but wonder what really went wrong.

HP obviously seemed all geared up to take on its rivals, Apple to be precise when it acquired Palm for a whopping $1.2 billion a year ago. And while the phones still lasted longer, the TouchPad sadly was abandoned in less than a two-month period. Best Buy managed to sell out around 25,000 units of the device and HP did see the slate not having garnered the anticipated attention already. Even the $100 price cut didn’t do much for the by now clearly doomed device. If HP’s intention was beating Apple at its game, the company had evidently failed. It stood nowhere close to the 1 million sale figures that the iPad had reached within a month of it being launched.

HP’s CEO Leo Apotheker summed it up by saying, “Consumers are changing the use of their PC. The tablet effect is real and sales of the TouchPad are not meeting our expectations. The velocity of change in the personal device marketplace continues to increase as the competitive landscape is growing increasingly more complex especially around the personal computing arena, the tablet effect is real”.

There’s no denying the tough competition every other tablet manufacturer faces with iOS and Android around. While one has the hardware doing much of the talking for it, the other software gets a pat on the back. When HP partnered with Palm, the latter was already down in the dumps, and almost every webOS fan hoped HP to up the ante. But the PC-maker was almost certainly confused if not ignorant with the HP webOS devices. With so much goodness in the PC terrain to back its worth, surprising as it was, the company did nothing exceptional to the otherwise top-notch software. Even as the TouchPad didn’t open up to rave reviews, the platform didn’t seem like the reason for the backlash it faced. In fact the system had multi-tasking as its stronger point, something most tablets have far from achieved even now.

Did the HP TouchPad hit markets before it was actually prepared to leave the stable is also a question asked by many. Considering HP didn’t get any carriers really committed to selling its webOS devices further says a lot. What or should we say ‘who’ killed the webOS devices then? It’s without doubt HP that’s going to have to take up the blame for messing up what could have been the next-generation mobile platform. And simply not being able to generate enough interest in the HP webOS devices is one of the main reasons why.

Revolutionary hardware was what most consumers at least those already owning the old-school Palm phones were expecting. But HP preferred to employ the tried and tested design without really adding any cool factor to the products. 8 iterations of the webOS are available presently. Add to it an insistence on not releasing timely updates for the HP webOS devices further pushed back both developers and end-users eventually. In fact The Next Web reports that the platform apparently ran faster by almost two times on the iPad 2.

We aren’t very sure what head of HP’s webOS global business unit, Stephen DeWitt meant when he said “We are not walking away from webOS.” The future of the OS with HP at least looks blurred for now. With the TouchPad already resting in peace, it won’t be long before we should be saying our final goodbyes to the Pre phones too. So what’s next for the operating system? HP has the chance of the operating system being licensed and as HP VP Richard Kerris puts it in a tweet the company could ‘explore the best hardware partner’. Open sourcing the platform is another option as well. In a more simple turn of events, for all you know, HP may just sell it off completely and yes move on.

If not the best, it was definitely one of the most worthy platforms to really be giving the iOS sleepless nights. Alas! It’s time came too soon thanks to the dull hardware. As HP is in talks for spinning off its PC business too, what the future holds for the webOS is difficult to tell and we can only wait and watch. Who do you think would be the next victim of this tablet war? What BlackBerry Playbook or Motorola Xoom! Let’s see.