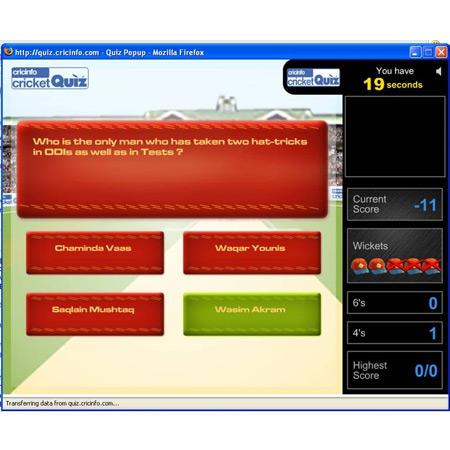 Though the Indian cricket team would love to suffer a partial amnesia when it comes to speaking about their performance in the ongoing ICC Cricket World Cup 2007, Indians can just not resist keeping away from this bat and ball game.

Keeping the pulse of the nation in mind, Cricinfo, part of the Wisden Group, and the world’s leading player in cricket related content and entertainment services, officially launched two online cricket games – Slogout! and Cricinfo Cricket Quiz on Thursday. On one hand while Slogout! allows the user to showcase his power-hitting batting skills, Cricinfo Cricket Quiz is an ideal test which checks your cricket trivia knowledge.

Swapna Mitra, Associate Head of Products, Cricinfo says, “When Cricinfo tested the beta version of these games, we saw an overwhelming response from users across the world. Even before the official launch, we have clocked nearly 20,000 registered users. We expect another huge jump in users when we enhance the games with greater interactivity and boost user experience.”

Slogout! is a flash-based online cricket game, where the players are given a target to score. In this game users have to log in and then firstly choose their team, which team to play against, the number of overs they wish to play for and other options. While other online cricket games may seem a little tough and complicated, apparently the playing options for Slogout! are comparatively simple as shots can be selected using only the four arrow keys

A glance at Cricinfo Cricket Quiz

Cricinfo Cricket Quiz is a flash-based online quiz game, which serves out questions of different levels of difficulty and pits the player in competition with other fellow cricket quizzers. A player can play the quiz up to 5 times (5 innings) to try to maximize his score, and in each innings the player has 5 wickets, meaning he cannot make more than five mistakes.

In addition, a player can also create leagues and invite friends to play and have a league competition. Players can check their rank amongst all players, as well within their own country.