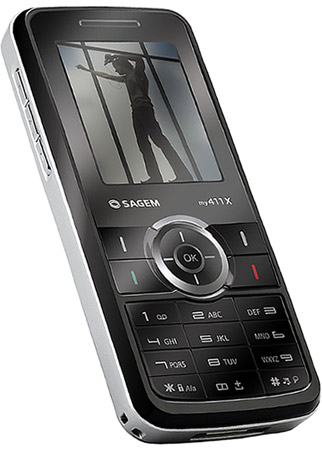 Sagem has introduced a new phone in the Indian market. The Sagem Bleu my411x is a triband mobile phone that sports a sleek and stylish look. This phone that the company claims will “cater to the masses” is loaded with great features.

The Sagem Bleu my411x handset has a slim look as it measures just 14.2mm and weighs just 85gms. This light weight phone has a mirror finish, lending it a very classy look.

This phone which posts a contemporary black design features a large higher resolution color display. It also has a four-way scroll, which makes navigating across the large display very simple.

The Bleu my411x mobile phone from Sagem is equipped with for all purposes as it has great connectivity as well as media features.

The Sagem Bleu my411x is equipped with Bluetooth and GPRS for file sharing and Internet connectivity respectively.

Media features on the Sagem Bleu my411x include MP3, video recorder and playback. Also, this handset has a VGA camera with a 4x digital zoom.

Besides, since the Sagem Bleu my411x mobile phone is Java-enabled, it is very easy to download and install games, tools, applications and other media.

Sagem Bleu my411x will be available with Pratham Telecom who is the distributor of the phone. It will also be available in stores that sell mobile phones for a price of Rs.5100.