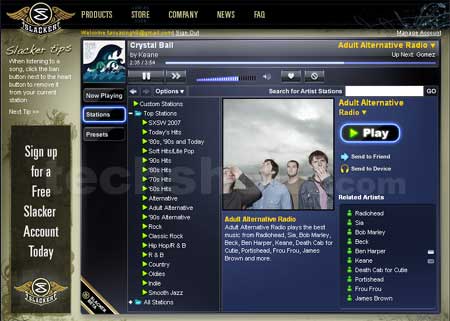 Slacker Inc., a San Diego-based start-up company has just launched Slacker.com, a new satellite based radio service. As of now, Slacker.com is available in beta or testing stage. This new radio service sure helps to take personal taste in music to another level altogether, as it combines elements of Internet radio, portable music and satellite distribution.

Here is how it works:
Users who log onto Slacker can begin listening to music from more than 10,000 stations that are built around specific artists and preprogrammed genres. Besides, users can also create their own stations by indicating what types of songs they want and letting the “Slacker DJ”, an automated system based on complicated algorithms, fill up the station program with more content.

Users can click on a button to ban a certain song. Clicking on a “heart” button will mark the track as a favorite and cause the song to be played more often on that station. Besides, users will also be able to email their friends with their favorite stations.

We at Techshout are avid music lovers and courtesy Slacker; we now have a great solution. We tried Slacker out a few days ago, and found it to be really good. We can now save time, instead of manually choosing songs and making playlists. Besides, we also noticed that the buffer speeds are really fast.

The basic Slacker radio service is ad-supported and free of cost. However, a premium level of Slacker’s services is set to launch in Q2 2007 and will cost $7.50 per month. This upgrade will eliminate advertising and will of course give its users more features and flexibility.

As if that wasn’t enough to contribute to the world of music on-the-go, Slacker also plans to launch a separate Wi-Fi enabled pocketable gadget called the Slacker Personal Radio Player that will be able to play the personalized selections of users. This gadget will be priced from $150 to $299. Secondly, a car kit that will deliver the music via satellite signals will also be available later this year.

According to Slacker co-founder and Chief Executive Dennis Mudd, “The only problem is that until now, personalized radio has been stuck on the PC. Slacker solves that problem.”
Slacker also is looking to integrate its radio service in devices made by others, including cell phone makers.