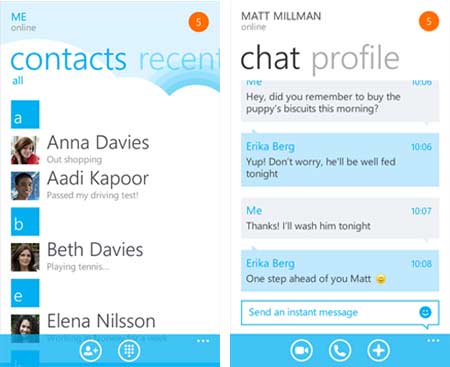 The Skype for Windows Phone app has received updates and the new 1.2.0.257 version is now up for download through the Marketplace. Besides adding a couple of improvements to the application, the company has also taken care of bugs and some issues experienced by users.

One of the new features introduced in this version, allows viewing all contacts on the Skype list. But only those phonebook contacts that have at least one number will be visible in the app. Additionally, the updated tool now enables its subscribers to edit the number in the dial-pad itself, before they place a call.

The issues that have been resolved by the developers include the calling feature. With this new update, the Skype call will not end if the person chooses to answer an incoming call or receives a calendar notification. In addition to this, the problems regarding crashes and memory leaks have also been taken care of.

And this version of the video calling tool will also not leave users wondering if their instant messages have been sent successfully or not. A pending indicator will show up if the receiver is unable to get the message with regards to faulty connections.

Besides making Skype-to-Skype voice and video calls, the app facilitates sending IMs over Wi-Fi or 3G network connection. It even lets users make phone calls to mobile phones or landline numbers at relatively low rates. It works best with phones with at least 512MB of RAM memory.

The Skype for Windows Phone app is available for download through the Windows Marketplace for free.