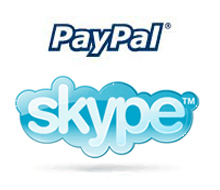 Skype, the most popular Web telephone calling service will soon allow its users to send money to other Skype users via the PayPal online payments system. This announcement was made by Skype’s co-founder and Chief Executive, Niklas Zennstrom.

Zennstrom spoke at a technology conference in Silicon Valley, where he elaborated on the company’s plans for the future. He said that the company is working with PayPal. However, he declined to say just exactly when the service would be made available to Skype’s users all around the globe.

Speaking of the upcoming service on Skype, Zennstrom said, “You can send money over Skype. This is basically connecting the Skype community over PayPal. All the user needs is a PayPal account.”

Following the announcement made by Zennstrom, a Skype spokesperson said that the service would most likely be unveiled within a month’s time.

Both Skype and PayPal are units of online auction leader eBay. In fact, PayPal is already the most popular way that Skype users pay for long-distance Skype phone calls to other phones.