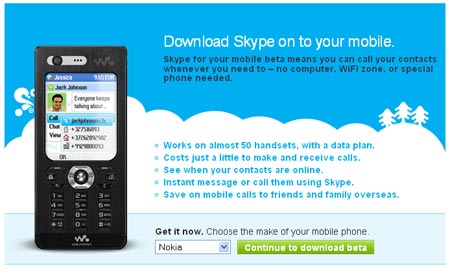 The beta version of the Skype mobile application will test around 50 Java-enabled mobile phones from various companies such as Motorola, Nokia, Samsung and Sony Ericsson.

The beta version will feature chat, group chat, presence (seeing when your contacts are online), and receiving Skype and SkypeIn calls.

This beta version will only be available in eight countries including Brazil (Rio de Janeiro), Denmark, Estonia, Finland, Poland, Sweden, and the United Kingdom.

“Skype for your mobile is in beta,” said Gareth O’Loughlin, general manager, mobile and hardware devices. “it is an important time for us to listen to our users’ feedback, be it through surveys or user forums. We need to hear what delights them and where there is still work to be done. But this product underscores our commitment to innovation and to putting Skype conversations in the pockets of today’s mobile masses,” he added.

After the beta version, which is expected to last for several months, a public version of the Skype mobile application will be launched.

Those who want to download the beta version of Skype mobile can do it by two ways. They can download it as a direct over-the-air download to a compatible mobile phone or they can download it to a computer and then transfer it to the phone. Interested customers can visit Skype at www.skype.com/go/mobiledownload.