Version 4.5 of Skype for Android has brought with it some interesting additions which are focused on letting you easily multitask on your tablets. A picture in picture window now forms part of the application’s offerings, allowing you to keep your video calls going even while using other apps from your device. The update is live currently, and can be downloaded through the Google Play Store.

The Skype blog has called this new feature its ‘first tablet breakthrough,’ and has disclosed that it works on audio calls as well. Windows 8′s Snap View is something that was kept in mind when the developers were designing the trait, a blog post has revealed. Even though a message asking for permission to use this trait will appear on smartphone versions of the app, it’s only available for tablets at the moment. 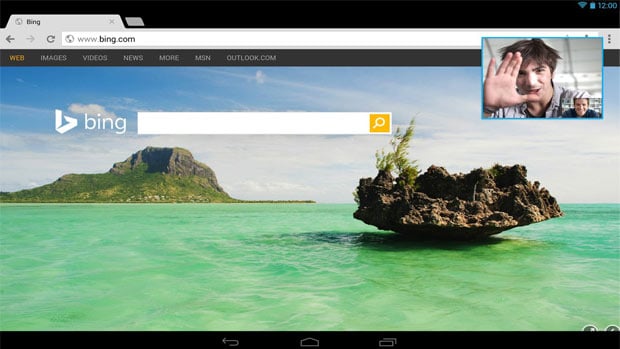 Other additions also make their way into Skype for Android through its 4.5 version. These include an ability to quickly jump from one letter to another in your contacts list. All you need to do in order to use this feature is pinch your contact list to zoom out to a alphabets screen, and subsequently tap on a desired letter. This sounds like a pretty interesting add-on for those who have too many Skype contacts to browse through.

Furthermore, crashes experienced on the new Nexus 5 smartphone have been fixed by the new update as well, whereas the Video Instant Messaging functionality of the service has received fixes for working with the latest Samsung Galaxy phones. This new version of Skype for Android can now be downloaded through the Google Play Store.